It can be easy to think of softball as a game of just pitching and hitting. Yet, considering the relatively small field on which the teams compete, baserunning and fielding often have an outsized impact on the outcome of the contest. 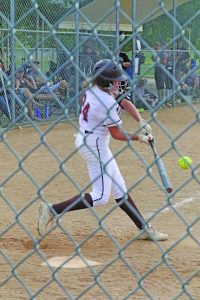 Those critical components of the game were on full display last Thursday at Bein Field where the Berthoud High softball squad dispatched of visiting Northridge by an 11-3 final tally. Throughout the seven-inning contest, it was the Lady Spartans playing clean defense in the field and making smart decisions on the base pads.

“That’s the key, that was the key and that’s what we haven’t been doing against good teams, we haven’t been making the routine play and teams have been making us pay for it and tonight we played defense and it makes a big difference,” a pleased Berthoud Head Coach Buddy Kouns said after the game. “Maggie (Langer) made some big plays, Carly (Fischer) made some great plays, Shaylee (Spears) made a great play, Mason Premer stepped in at shortstop and made some big plays, so yes, if we play defense, I like our chances with anybody, when we don’t play defense, we build ourselves some hurdles.”

While Berthoud was able to jump ahead early, taking a 4-1 lead in the home half of the first as the Lady Spartans batted around – Carly Fischer’s two-run double doing half the damage – Berthoud defense regularly kept Northridge from doing much damage from the plate.

With runners on second and third in the top of the fifth, Mason Premer turned a textbook play at short, scooping up a hard-hit ground ball and firing to Lauren Zavednak at first to end the frame without a run allowed. Twice Shaylee Spears chased down long fly balls in right field to secure the out and Fischer did the same in left. And at third base, it was Maddie Langer on multiple occasions turning in gold glove caliber play.

“I think a big thing is having trust with my teammates because I know at third I can get a lot of hotshots and so it sometimes can get kind of chaotic so knowing exactly where I can go and my teammates, especially Laruen, she had some great digs, knowing they have my back is very helpful,” Langer explained. “I think anytime we can make a good play in the field, any time you can make an out, it’s huge, it really helps the team, we limited them to just a few runs tonight so definitely making plays, making the routine plays, has been really helpful.”

In addition to the textbook fielding, the tried-and-true formula of hitting and pitching certainly played a big part in the win. On the night, Berthoud tallied 12 hits, six of which went for extra bases and while ace pitcher Cemryn Pickett did allow some baserunners through the first few innings, she had found her groove by the fourth frame. After Spears secured a fly ball, Pickett struck out the next two Northridge batters in succession. After Premer’s stellar play at shortstop ended the fifth, Pickett faced the minimum six batters in the final two shutout innings.

Fittingly, the final play of the game was a terrific double play turned by the Berthoud defense. Pickett walked Lilyanna Ramos to lead off the top of the seventh but the lone base runner did not phase her one iota. Pickett fanned the next batter in just four pitches before inducing a groundball to Zavednak who stepped on first and fired to Premer at short to complete the double play and secure the W for Berthoud. Pickett finished the night surrendering only four hits and striking out eight in the six-inning complete game, her tenth win of the season.

The Lady Spartans will travel to Parker to take on Lutheran on Thursday afternoon.