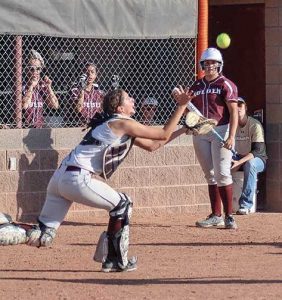 Berthoud catcher Hannah Langer prepares to make the game-winning catch against Golden in game five of the regional softball tournament in Erie on Saturday.
Photo courtesy of Tiffany Rafferty / The Surveyor

No one can say the Berthoud High School (BHS) softball team does not have a flair for the dramatic.

After splitting their first two games of Saturday’s regional tournament on the sun-drenched ballfields at Erie High School – Berthoud bested Golden 5-1 before falling to one-seed Erie by a 10-0 final – the Lady Spartans faced a rematch with Golden in the tournament’s do-or-die game five. Berthoud trailed 3-0 after the first inning but pushed four runs across the plate in the sixth and four more again in the seventh to win in thrilling fashion and in so doing punch their tickets to the state tournament.

Playing three games in August-like temperatures with barely a 30-minute break between each was not too much for Berthoud, as virtually every Lady Spartan who suited up contributed in one way or another, in manners both vivid and routine, in the trio of games.

“All you’re going to hear from me is that right there was a team win,” a highly-pleased Berthoud Head Coach Buddy Kouns said.

Golden bested Montrose 16-1 in their second game and their hot streak continued into the opening inning of their rematch with Berthoud. The first three Demons to step into the batter’s box came around to score as Berthoud pitcher Sarah Jorissen, who pitched seven innings in the first game and another four against Erie, struggled with her command.

Jorissen quickly made an adjustment to her mechanics that shored things up; the sophomore allowed only five Demons to reach base after the first inning.

“The first inning I was a little tired and Coach Rich [Royer] told me my legs were a little slow so I knew I had to get my legs faster,” Jorissen explained. “So I fixed my legs and it helped me a lot. I came out here today and knew we had to get a job done and that was my mindset the whole day.”

Even with Jorissen pitching masterfully from inside the circle, Golden held firm on their 3-0 lead as Berthoud could not get a run home despite having 11 players reach base through the first five innings. The Spartans threatened in each frame, getting base hits to lead off the third, fourth and fifth innings but, even when coupled with a pair of fielding errors by Golden, were unable to break through.

“It was frustrating for sure, and it’s something we’ve dealt with all season, just leaving people on base, we just have to get those timely hits,” Berthoud catcher Hannah Langer said.

As the mercury pushed into the upper 80s late in the game, the Spartans bats collectively got hot. Langer legged out a bunt single and advanced to second when Rea Miramontes reached on a fielder’s choice the following at bat. Langer scored the Spartans’ first run of the game when Sotera Dageenakis put a ball in play. With two outs, Morgan Schachterle and Tristan Pope each got hits, with Schacterle’s base hit scoring Miramontes. Sophomore leadoff hitter Addie Spears then cleared the bases with a two-run double to give Berthoud a 4-3 lead.

Langer, Miramontes, Dageenakis and Schachterle scored in the seventh, Langer on a Dageenakis single and the other three on a Pope triple that pushed Berthoud’s lead to 8-3.

“At that point I was just hoping for a ball that I could get a good hit on and that I could get on base and my teammates could push me on with that. It’s great that I can trust the girls around me,” Dageenakis said when asked about her run-scoring single that gave Berthoud a much-needed insurance run in the seventh inning.

Golden threatened in the bottom half of the seventh, working to a two-on, two-out situation, but three-hole hitter Makenzie Middleton was able to get only a tiny bit of bat on Jorissen’s 1-2 pitch, popping the ball up down the third baseline where an adept Langer tossed her catcher’s mask aside and caught the ball, clinching the win and securing the Spartans spot in state.

On facing Golden for the second time in a matter of hours, Jorissen said, “That definitely gave me an advantage because we knew their weak spots and we could attack them that way. I actually don’t mind playing a team twice because you find the weaknesses and can go after them.”

Langer and Dageenakis, both seniors, said they faced the prospect when they came to the plate facing a 3-0 deficit in the sixth inning that they could very well be the last at-bats of their high school careers.

“Yes 100 percent that was going through my mind, but I told myself I wasn’t going to be the last out; all three of us seniors were thinking no way we’re going to be the last out; we’re going to keep this going all the way,” Langer said. When posed with the same questioned, Dageenakis replied, “It was for sure. I was hoping that it wasn’t and I was really happy that I hit the gap that I did.”

Freshman standout Ashylnn Balliet, who tallied two hits and scored two runs in the first game against Golden and played flawlessly at the hot corner for Berthoud throughout regionals, said facing an unknown opponent was not a problem for Berthoud.

“The challenge is just put the ball on the bat and get on base, not who you’re playing or what game it is,” Balliet said. “I felt that I just needed to produce runs and hits for my team and help put up a big W for us.”