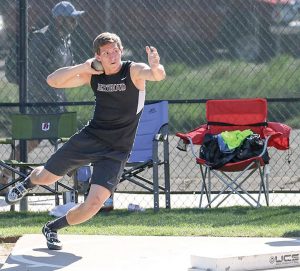 Max Bump throws the shot at the 4A State Track and Field championships at the Jeffco Stadium on May 19-21. Bump finished in fifth place in the event with a throw of 49 feet 10.25 inches.
Courtesy photo

Max Bump was the first Spartan to medal at the state track meet this week, but he was certainly not the last. The senior brings his best for the big competitions as he threw over 50 feet to win the Tri-Valley Conference meet two weeks ago and placed fifth at the state meet with a toss of 49 feet 10.25 inches. Bump has improved almost 5 feet since last year in the event. This year he has been working with coaches in Ft. Collins and then returning to Berthoud to help coach his fellow throwers. Bump was also entered in the discus throw but struggled in the event at state and finished 13th with a throw of 140 feet 7 inches. Bump has been asked to return to Berthoud next spring to coach the throwers if his school schedule allows.

Alyssa Strong was another Berthoud athlete who has worked very hard this season. The senior placed second in the triple jump with a leap of 36 feet 4.5 inches; the jump was a celebration of perseverance. Strong has struggled with the event for the past few weeks, so her coaches had her work on the basics and it paid off with one of her best jumps of her career. Shortly after the triple jump, Strong raced in the preliminaries of the 100-meter hurdles. Strong ran 15.92 seconds but just missed the finals placing 10th. Strong will run track at the University of Colorado at Colorado Springs next year.

Kristina Cavey and Cailey Archer spent most of the year battling each other for the top positions in the high jump. Both girls have jumped 5 feet 5.5 inches, which set a new school record this year. The senior, Cavey, returned for her third trip to the state meet with intentions of having fun. Last year Cavey was stressed about the event and finished a disappointing 11th place after having placed sixth as a freshman. This year Cavey just relaxed and enjoyed the process, finishing fourth place with a jump of 5 feet 4 inches in what may have been her last jump over the high-jump bar. Cavey will attend Fresno State University to play basketball in the fall. Archer tied for sixth place jumping 5 foot 1 inch. Archer is a freshman with a lot of potential for the next four years.

Chad Ellis qualified to state in the 400 meters. The senior ran his third fastest time of his career with a time of 51.53 seconds. However, that was not fast enough to advance to the finals. He finished in 15th place. Ellis will hang up his spikes for football cleats at Oklahoma Panhandle State University.

State is a three-day event. Many fans are worn out by 4 p.m. on the final day at the conclusion of the girls pole vault, but the ones from Berthoud were celebrating Josie Spitz and Kelly Chamberlain. Spitz set a new personal best vault at 11 feet 11 inches on her way to a third-place finish. The senior bumped the crossbar on her final attempt at 11’11” but the bar stayed on and she set a new Berthoud school record. Considering Spitz’s first vault as a freshman was 7’0”, that record will be very hard to beat. To demonstrate how much the event has changed over the past four years, consider Spitz placed third in the meet with that 7’0”. The winner of the pole-vault competition, Andrea Willis vaulted 13’4” and is currently ranked second in the U.S.A. Spitz will continue her pole-vaulting career at University of Sioux Falls next year.

Five girls cleared 10’8” inches but missed 11’2” including Chamberlain. Athletes are given three attempts in the pole vault to clear each height and ties are broken based upon misses. Chamberlain had the fewest number of misses, so she beat the others in the group and placed sixth. Chamberlain will join Strong at the University of Colorado in Colorado Springs.