Ally Padilla, state champion in the 4×800 relay last season, ran her first race of the 2022 season for Berthoud High School (BHS) at the Greeley Twilight meet last Friday night. Padilla followed teammate Sydney Slauson in the 800 meters until the final stretch when Slauson pulled away to finish in third place. Padilla was six seconds off her best time but still managed to place fifth. It is unusual for a senior to pick up a new event, but Padilla is also learning to high jump this year, clearing 4’0” on her first try at the event.

Another senior, Anndee Davidson, who will be a heptathlete at Fort Hays State University next year, competed in two events she has not yet done in a year. Davidson jumped 4’6” in the high jump and placed third in the 300-meter hurdles, less than half a second off her best time in the event. Addie Kirkpatrick is back from an ankle injury to compete in the long jump. Kirkpatrick placed fifth in the long jump and was part of relays that medaled at state last year. 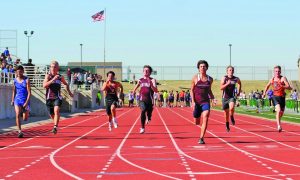 ”It is great to have Ally and Addie back competing again,” commented BHS Head Coach Blaine Voth.

Jack Wingard had a unique combination of events – the pole vault and the 800-meter run. Wingard set PB’s in both events, placing seventh in the pole vault. Marie Caberra ran her fastest times in both the 800 and 1,600 in Greeley. Distance runner Daniel Hatton and Wyatt Schmidle placed seventh and eighth on their way to running a PB in the 1600. Adam Beard and Julian Rayon also bettered their previous times in that race. Noah Quillen, Hugh Shadle and Bella Miller posted PB’s in the 800.

In the shot put, Lilly Strait, Easton Armitage and Kaden Sandvik each posted a PB. Trevor Moore and Everett Peatrowsky did the same in the discus. Gracie Flores placed sixth in the shot put but was off her PB in the event.

Berthoud’s boys scored most of their team points from relays and the jumps. Jaydin Hedelius was second in the high jump by clearing 6’, Jayden Nohr placed second in the triple jump setting his new best mark at 41’, 3.75”. Weston Peatrowsky improved his PB by half of a foot in the triple jump placing eighth. The relay teams of Nohr, Kasperbauer, Jay Michaelis and Kamron Hosier placed fourth in the 4×200 and fifth place in the 4x100m.

Freshmen Ellie Harper (200) and Sydney Slauson (800) added to the team score by placing third in their respective events. Both girls anchored a relay that finished in seventh place. Harper was in the 4x200m relay with Adrianna DeGesualdo, Sydney Hardy and Gabby Staley. Slauson ran with Bella Miller, Aleeya Riehl and Padilla in the 4×400 relay.

In an effort to break away from the altitude factor (which slows times for distance runners quite a bit) and match themselves against tougher competition, Olivia Krueger and Jaycee Williams traveled to Arcadia, California to compete in an elite meet. Williams ran 2:13.05 in the 800 meters, currently ranking her the fourth fastest sophomore and 56th overall for high school girls in the USA. Krueger placed sixth in the 3,200 meters in 10 minutes 50 seconds on Friday and returned on Saturday to run the one-mile in 5:09. These times rank Krueger 90th in the country among all girls in the one mile and 113th in the 3,200m.

The track team will be split next week with some members competing at the Pomona Invite and the rest of the team going to Gilcrest for NOCO No. 2.