By Kristi Leonard and John Gardner
The Surveyor 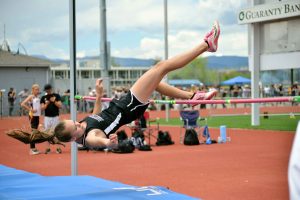 Sophia Visger clears the bar at five feet for a second-place finish in the high jump at the Tri-Valley Conference Championships on May 2 at Longmont High School.
John Gardner / The Surveyor

The number three resonates with the energies of optimism and joy, inspiration and creativity. A triad is a symbol of unity of the mind, body and spirit. Three senior girls, Lydia Lind, Kiah Leonard and Emily Voll, competed in the final three events on Saturday afternoon when the Tri-Valley Conference team title was announced.

“It’s bittersweet because we lose these three girls who’ve given us four years and done so much for us,” said Berthoud head track and field coach, Colby Schultz.

Three years ago Berthoud moved up in classification from 3A to 4A and joined the Tri-Valley Conference. But that didn’t deter the Berthoud High School (BHS) girls from winning the conference track and field title all three years.

“It’s a lot of fun,” Schultz said. “These girls work hard and they never surprise me how they come out and do exactly what they are supposed to do.”

Of course, the trio could not have accomplished this feat without their talented younger teammates who will most likely continue the tradition. This year Berthoud High girls won with a total of 142 points, Windsor was second with 122.5, and Roosevelt was third with 104.5 in the eight-team conference championships.

“We knew that we were going to have to come out and do our best to do it again,” Schultz said of the three-peat.

The conference meet was a two-day contest at Longmont High School and is designed to give athletes the best possible opportunity for optimum performance. On Friday, Berthoud’s Alyssa Strong started things out for the Spartans, winning the 100-meter hurdles and setting a meet and personal record with a time of 15.92 seconds, narrowly edging out Windsor’s Janae Schiel by four hundredths of a second.

Senior sprinter Lind had an eventful weekend as well, placing second in the 100-meter dash with a time of 12.82 seconds behind Erie’s Kyleen Newman who crossed the finish line at 12.37 seconds. Lind raced to a third-place finish in the 200 meters with a time of 27.26, behind Windsor’s Samantha Polly and Skyline’s Alison Goebel. Lind also jumped to a third-place finish in the long jump with a distance of 16’2”.

“[Lind] comes out and does what she has to do to help her team win,” Schultz said.

Berthoud freshman Sophia Visger didn’t race in the same heat as Lind in the 200 meters, but clocked a time just behind Lind with a time of 27.32, keeping Berthoud’s future in the event secure.

Kelly Chamberlain won the pole vault with a vault of 9’10”. Chamberlain’s height was a full foot higher than second-place Sarah Hubert of Windsor.

“She had a great event and ended up winning,” Schultz said.

Due to a lightning delay on Friday, some events were shuffled from their original position to Saturday.

The girls 4 x 100 relay team of Chamberlain, Lind, Catherine Meeker and Whitley Porter placed fourth with a time of 51.03 seconds, only one second behind first-place Erie who crossed the finish line at 50.03 seconds. Frederick and Windsor took second and third respectively, in the contest.

Meeker followed up that performance with a personal best in the 400 meters with a time of 1 minute, 2 seconds, good enough for fifth place.

Berthoud’s Kiah Leonard finished in the top three in four events; she ran in the 4 x 400 relay event which took third place, finished second in the 800 meters, and took first in both the 1,600 and 3,200 meter races to cap off an excellent high-school career. She also set a meet record with her time in the 1,600.

Berthoud freshman, Visger, had an exceptional weekend as well, placing second in the high jump, clearing 5’0”, third in the triple jump with a distance of 31’11”, and fourth in the 200 meters with a time of 27.36, making future conference titles look very likely.

“Sophia comes out and takes second in the high jump, which is huge,” Schultz said.

The final event for the athletes was the 4 x 400 relay where Meeker, Ashlyn Fahrenbruch, Leonard and Voll raced to a third-place finish in 4:23.74, close to the BHS season record of 4:23.41.

“It was a really good event, and it’s neat to see these kids come out and do what they had to win,” Schultz said.

A coaches’ 4 x 100-meter relay was added to the meet to add a little fun. The anchor leg was supposed to wear the head of the school mascot. Head Coach Colby Schultz started the race and demonstrated excellent form in the starting blocks. Schultz handed off to high jump coach Bre Wold who then handed the baton to distance ace, Jordan Jennings. Although Jennings would have preferred to run another 700 meters, he had to hand the baton off to sprint Coach Tracy Schultz. Tracy Schultz ran the last 100 meters with a heavy brass Spartans helmet bouncing atop his head. No times were kept, which is probably a good thing for the coaches. 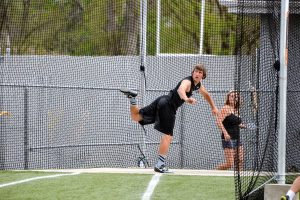 Berthoud’s Max Bump watches his discus throw at the Tri-Valley Conference Regional Track and Field meet at Longmont High
School on May 2. Bump won the event with a personal best throw of 142-feet, 3-inches. Teammates Karsten Bump and Jamie Grey took second and fourth places, respectively, to help the Spartans to a fourth-place finish.
John Gardner / The Surveyor

Coach Schultz said that even with the girls winning a third-straight conference title, it was the boys that impressed him the most.

“I was more impressed with the boys’ performances more than anything,” he said. “We had amazing performances, especially in the discus; that was a great one for us.”

The discus throw was a highlight event for the Spartans on Saturday as Max Bump won in style, marking a new personal best throw of 142’3”.

Karsten Bump finished in second place with his best mark of 134’4”, while Jamie Grey took fourth with a throw of 124’4”.

In the boys’ shot put, Max Bump and Lucas Czarnecki had personal-best throws. Bump took third place with a throw of 45’6”, Czarnecki was sixth in 42’3”, and Grey was seventh throwing 42’0”.

On the boys’ side of the track, Berthoud’s Michael Woodiel placed fourth in the 100 meters with a time of 11.48 seconds.

Senior Luke Spitz continued on his quest for personal-best times as he finished in second in the 1,600 meters with a time of 4 minutes, 36 seconds.

On Saturday morning, the BHS boys started scoring with the 4 x 200 relay. The event was one that had been postponed from Friday evening. Steele Castles, Logan Johnson, Woodiel and Chad Ellis placed third in a season-best time of 1:32.88. The same four guys set a season best in the 4 x 100 relay in 44.71 seconds for third place later in the day, as well.

Elijah Grewal helped his team by taking sixth with a personal best in the 800 meters with at time of 2 minutes, 6 seconds. Grewal was also sixth in the 1,600-meter run.

Wyatt Woodrick jumped 19’9” for third place in the long jump.

Cally Castles placed fifth in the high jump, clearing the bar at 5’10”.

Brock Voth placed sixth and Castles was seventh in the triple jump with distances of 38’3” and 37’10”, respectively.

Ryan Schmad finished in sixth place in the 200 meters with a time of 24.05 seconds.

As a team, Berthoud finished fourth with 91 points. Windsor won with 148 points. Roosevelt was second with 119. Erie was third with 108 points.

Next year the Spartan boys will be a force to contend with; Woodiel and Spitz are the only graduating BHS scorers from the meet. Berthoud freshmen were a big reason for the boys’ performance as well.

“This freshman group is really promising for us,” Schultz said.

Many other freshmen finished just out of the top eight this year, but with a year’s growth will no doubt be competing for the title next year.

The next meet for the Spartans is May 9 at Eaton before preparing for the state championships, May 14-16 at Jeffco Stadium.