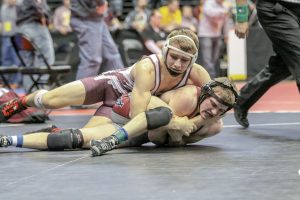 It may seem strange to say a wrestling team that claimed a pair of state champions, had five on the podium, and finished in third place had a disappointing weekend at the state tournament, however, the Berthoud High School (BHS) wrestling team’s expectations were higher.

The Spartans qualified 13 wrestlers for state, out of 14 weight classes. Seniors Chad Ellis (195 pounds) and Jimmy Fate (160) won their second and third state titles, respectively, and three more Spartans – Kyler Baily (138), Austyn Binkley (126) and Ben Poirier (152) – took the podium with a fourth and pair of sixth-place finishes, respectively. Yet the team thought they could have collectively done more.

“Overall we didn’t have a very good weekend of wrestling,” said Berthoud head coach, Scott Pickert. “I mean, we lost a lot of close, tight matches and we’ve really got to look at that as a coaching staff and figure out what we’re doing wrong to correct that.

“We had a good week [in practice], we were focused on coming down here, we treated it as a business trip, and we just didn’t have a weekend we thought we were capable of having.”

Despite having eight of their school-record 13 state qualifiers bounced out before the placing rounds, Berthoud posted a team score of 97.5, behind only state champion Valley (144) and runner-up Dolores Huerta (119.5). The Spartans lost a number of bouts in close, heart-breaking fashion.

Senior Kyler Bailey, one of Berthoud’s five wrestlers to enter state as a regional champion, lost his quarterfinal match to Eagle Valley’s Raul Lopez by a 7-5 decision. Bailey was able to beat Shaun Staats of Delta 10-5 to advance to the third-place bout that with it came a rematch with Lopez.

Bailey took a 3-0 lead that he extended to 6-0 with a near-fall in the second period. Lopez rallied in the third, scoring on a near-fall of his own and eventually knotting the match at 7-all and sending the bout to overtime where he won 9-7.

“I was really excited to get another chance at it. I knew I could win, I just pushed the pace the whole time. I didn’t want him to take that third place from me,” Bailey said. “I got that 6-0 lead and, he’s a tough wrestler, he just ended up out-wrestling me and it was tough, but he’s a good kid.”

Disappointed but content knowing he gave it his all, the senior continued, “I wrestled to my best ability so I’m satisfied. I’ve really wrestled well all season long and put in a lot of work so that satisfies me but, again, fourth place isn’t what I wanted, I wanted to take first, so that aspect doesn’t satisfy me.”

Poirier, who got his first taste of state this season as a regional champion, got bounced to the consolation bracket after losing a 3-1 decision to Alamosa’s Reis Martinez in the quarterfinals. Yet the senior, who recovered from a dislocated toe and two broken bones in his foot, an injury he sustained in the fall, bounced back by winning 7-3 and 7-0 decisions to reach the consolation semifinals.

After regionals, Poirier said, “making it to state was my main goal.” He explained he was elated his injuries did not prevent him from making a run at the state title.

“I was a little worried about it because I couldn’t keep practicing. I love the fact that I was able to come back. I was like ‘you know what? It’s my last year and I can’t let my foot stop me. I just have to wrestle the best I possibly can.’” Poirier took sixth place, losing to University’s Justin Anderson by a 2-1 decision in the fifth-place match.

Binkley, a freshman who transferred to BHS in part because of the wrestling program, had to withdraw from his fifth-place match due to a back injury.

“I couldn’t feel my feet,” Binkley said after receiving his sixth-place medal. Despite advancing to the semifinals, where he lost a razor-thin 6-4 decision to Mead’s Jeremy Ashton in the final seconds, Binkley was left wanting more.

“I was not okay with losing in the semis by a tilt with five seconds left,” he said. “I’ve just got to stay hungry because I wasn’t really satisfied with anything because I didn’t win.”

Despite the less-than-expected third-place finish, Pickert was effusive in his praise of Ellis and Fate, calling both “tremendous wrestlers” and “great kids.”

“Their leadership in the room is going to be hard to replace,” Pickert said. “They’ve set such a high example for everyone else.”