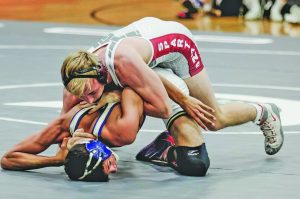 Photo by Melanie Johnson – Berthoud’s Austyn Binkly takes position over Frederick’s Brandon Andes last Thursday at BHS. Binkly won the bout with a pin in just 1:10 and remains the No. 1-rank in 3A’s 145-pound weight class.

They are the No. 5-ranked team in all of class 3A, and yet the Berthoud High School (BHS) wrestling team has not fielded a full lineup this winter. Head Coach Will Carron’s Spartans sent only half of their lineup wrestlers to Florence for their most recent tournament this past weekend. Three Berthoud wrestlers finished on the podium in the Mel Smith Husky Invitational as Colton Williams (120 pounds), L.T. Torres (126) and Brock Leypoldt (138) all won their fifth-place matches. As a team, the short-handed Spartans finished with 62 points, good enough for 20th place in the 31-team tournament.

Williams accepted a forfeit in the fifth-place bout in the 120 class after having earlier won a pair of matches via the pin and also winning a 7-0 decision before getting pinned by La Junta’s top-ranked Isiah Gamez in the semi-finals. Torres battled Brandon Nelson, also of La Junta, for nearly the full six minutes before securing the pin to advance to the quarterfinals in the 126 class where he won a 7-3 decision to make it to the semis. Torres lost a razor-thin 5-4 decision to Zach Loft of Sterling before ultimately securing a convincing 7-0 decision over Noah Damian of Valley in the fifth-place bout. At 138, Leypolt took care of business in his fifth-place match, winning a 5-3 decision over Elias Ramirez of Olathe.

The day before leaving for Florence the Spartans hosted Frederick for senior night in the BHS gym. Berthoud had to offer forfeits in four weight classes and both teams forfeited in the heavyweight class, but in the others it was top-to-bottom dominance from the Berthoud squad. The Spartans took wins in eight matches, six of the wins coming via the pin. The final score was Berthoud 45, Frederick 30.

Williams pinned Gabe Carillo in 120s just over halfway through the second period, the whistle coming after 3:34 had elapsed in the bout. Torres won via the decision, defeating Parker Ayers 14-8 in the 126 class. Talyn Massie pinned Cole Hoffman in 1:37 in 132s and Leypoldt did the same with his opponent, Jonah Sanders, in 3:38 in the 138s. Defending 3A state champion Austyn Binkly, who has held the No. 1-rank in the 145 class since preseason, made quick work of Brandon Andes, pinning the Frederick junior in just 1:10. Berthoud’s Kyle Conlon kept the pin streak going by getting Nate Pargee secured one second faster than Binkly, winning the match in just 1:09.

After offering forfeits in the 170 and 182 weight divisions – Berthoud senior Brock Johnson, ranked No. 4 in 170s, was held out of the match with an injury – Berthoud’s two upper-weight wrestlers each notched wins. Caleb Leep pinned Talon Veile in an astounding 38 seconds in the 195 class, and Peter Bullet took care of business in 220s, pinning Josh Hernandez in 1:36.