It always helps to show well when it is your tournament.

The Berthoud High School wrestling squad hosted the annual Diny Pickert Invitational on Saturday. The 12-team event, one of the most prestigious wrestling tourneys of the year, was ultimately won by the team from Severance High who accumulated 205 total team points. The hometown Spartans took a very respectable third place with 98 points, behind aforementioned Severance and Moffat County (183). 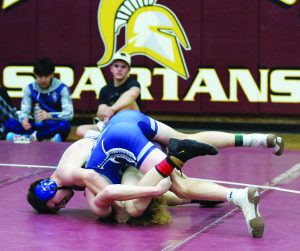 Photo by ACP Media – Berthoud’s Wil Moneypenny controls his opponent in Saturday’s Diny Pickert Invitational at BHS this past Saturday. Moneypenny claimed the top of the podium in the 145lb weight class to help propel the Spartans to a third-place finish in the prestigious 12-team tournament.

“You’ve got teams like Severance, like Moffat County, those are good teams with good kids and great coaches, they’re both tough teams and they came to battle. That’s not to say we didn’t battle because we did but we came up a little bit short a few times,” Berthoud Head Coach Josh Galindo said. “It’s always good to go up against teams like that and overall, I’m happy with how we battled all day.”

The 145lb weight division was the deepest at the event with 16 wrestlers from nine different schools competing in the bracket. After a full day, it was Moneypenny at the top of the podium. The junior, who placed at state in both his freshman and sophomore campaigns, made mincemeat of the competition, winning his opening match with a technical fall, 18-0, and then pinning his subsequent opponents in 13 seconds, 3:48 and finally, in the title bout against senior Jesus Ochoa from Sterling, in 1:51.

The four wins in the tourney put Moneypenny at a stout 28-4 record on the season, one that almost assuredly will provide him a very favorable seeding at regionals. A young man of few words who lets him dominance on the mat speak for itself, said his goal for the year is to make the state finals and have a chance to join wrestling immortality as a state champion. “It’s just working hard with the team, it’s all about putting in the work every day,” he said.

Torres, also a junior and team captain like Moneypenny, turned in a strong showing by taking third place in 152s. After winning an 11-4 decision over Trace Frederickson of Moffat County, Torres squared off against top seed Casteus Combs, who entered the day with a 29-3 record on the season. Torres battled Combs to a 0-0 draw after the first period and in the second Combs put three on the board with a takedown and an escape. Torres continued to battle, earned two points in final period on escapes but Combs earned two points for a near fall and added four more on a pair of takedowns to win the match 9-2, a score that was far from indicative of how closely contested the match was.

Torres credited his ability to hang tight with a wrestler of Combs stature to his conditioning – developed in part on the BHS cross-country and track & field teams on which he also competes – which he says is one of his biggest strengths as a wrestler. “He was all well-conditioned as I was, I gave it as much as I could but we got on me there in the third,” Torres said of the semifinal match.

In the third-place match, Torres worked his way to a 7-4 win, scoring two on a takedown in the first period and adding four more on a near fall and takedown in the third and final period. Torres said he will keep honing his technique while keeping his cardiovascular stamina in peak form as works over the next two weeks to earn a second trip to the state tournament in as many seasons.

In 106s, Gossett won his opening match with a pin in 2:57 but was then defeated in the championship semifinals was defeated by George Netzel of Severance in an closely contested 11-7 decision. Gossett rebounded from the defeat admirably, winning his next two bouts with pins including the third-place match where he got control and put Tanner Neeley’s shoulders to the mat in just 44 seconds.

In the 132lb weight class, Croft went two for four on the day, with all four matches being called via the fall. Croft won his first match of the day, pinning Niwot’s Javier Amaya Esparza in 2:27 but then defeated in the semis in 1:45 by Preston Holt of Lutheran. Croft won his first match in the consolation bracket in 3:30 but was handed a defeat in the third-place match by Eli Frederickson of Moffat County in 4:16 to claim fourth place in tourney.

In the 160lb division, Coble turned in a strong day. The lone senior on Berthoud’s squad defeated Dillon Griffin of Lutheran with a pin in just 48 seconds before working his way to a 2-0 lead after the first period in the semifinal match. As the second period began, Coble wrestled aggressively and secured Severance’s Riley Kunz to the mat, the winning whistle came just 39 seconds in to the second period and put Coble in the championship bout with top seeded Michael Voloshin, of Moffat County. Coble scored a pair of takedowns, one in the first period where he finished with a 2-0 lead. In the second period Coble scored another two points before Voloshin scored on a reversal and near fall to take a 5-4 lead before taking position and winning with the pin with just 10 seconds left in the second period.

Said Galindo, “The guys are starting to take off, we’ve had some injuries and some illness we’ve had to battle through, COVID has kicked everyone’s butt, and we’re going to work this next week, we have a good opportunity over the next few weeks to qualify a bunch of kids (for regionals and state).”

The Spartans will be on the mat for the Longs Peak League crossover tournament this week. The regional tournament, where four grapplers from each weight class have their chances to punch their tickets to state, will be held Feb. 11-12 in Brush.