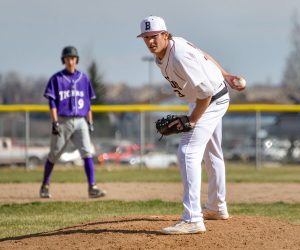 Berthoud’s Issac Bracken registered two hits on the afternoon and crossed home plate twice while getting his first start from the mound on the season.
John Gardner / The Surveyor

Hard-fought wins mean so much more than easy wins.

It took them three games to get their first conference victory of the season, but the Berthoud High School (BHS) baseball team hung five runs on the board in the bottom of the sixth inning on March 22 at Jack Sommers Field at BHS to beat visiting Holy Family by a 10-5 final tally.

After having lost the day prior by a 6-4 final in the first outing of a two-game Tri-Valley Conference (TVC) series, the Spartans five-run sixth broke a 5-5 tie to hand Berthoud their first conference win of the young 2016 season.

In their half of the decisive sixth inning, the heart of the Berthoud order came up big. Senior catcher Patrick Barron reached base on an error; Connor Balliet, Chris DeSousa and Josh Archer went single-double-single before Brogan Sontag added another base hit and Brent Fowler contributed a sacrifice fly to push five Spartans across the plate and give Berthoud a commanding 10-5 lead.

Standout Issac Bracken registered two hits on the afternoon and crossed home plate twice while getting his first start from the mound on the season. Bracken, customarily a shortstop who Berthoud manager Buddy Kouns planned to use as the team’s closer at season’s open, threw four and one-third innings, allowing five hits and only three earned runs while striking out five in his first action on the mound of the season. Bracken pitched a clean first three innings but surrendered a triple and a homerun before being pulled after 87 pitches in the top of the fifth. 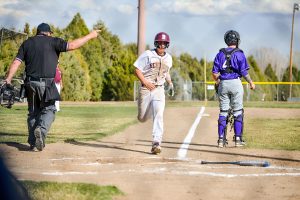 Berthoud’s Chris DeSousa crosses home plate during the second inning of Tuesday’s game versus Holy Family. The Spartans won the contest 10-5 to give them their second win of the season.
John Gardner / The Surveyor

DeSousa and Josh Schumacher pitched the remaining two and two-thirds innings, allowing the Holy Family lineup to scatter just three hits while not surrendering a single run, to preserve the win for the Spartans.

Archer, Berthoud’s top-of-the-rotation pitcher, got the start in the first game of the series. The junior threw five innings, struck out eight and allowed no free passes but six runs, only three of which were earned, were enough to deny him a chance to notch his first win of the season. Holy Family’s Kennedy Phillips, who went two-for-three with a triple and three RBIs did most of the damage for the Tigers in the bottom of the fifth.

Seven Spartans registered hits in the loss, with Barron driving in a pair and Sontag and Colin DeVore each also tallying RBIs. Yet, all told, the Spartans stranded 11 base runners in the game and finished with a paltry .233 on-base-percentage as a team.

Berthoud (2-3, 1-3 conf.) will have more than a week off before they can look to continue the momentum they garnered against Holy Family, when they face off with Frederick in a two-game TVC series, the March 31 game being played at Jack Sommers Field at BHS before an April 2 affair in Frederick.