It is one of the most difficult feats in all of sports, at any level, a no-hitter.

Berthoud High School senior Adrian Short accomplished that feat in last Saturday’s game at Jack Sommers Field in Berthoud. Short, who has pitched marvelously all year long, threw a complete seven-inning game, allowed no hits, no runs and struck out a whopping 15 Mountain View batters. As importantly, he picked up the win as the Spartans took the game by a 1-0 final. 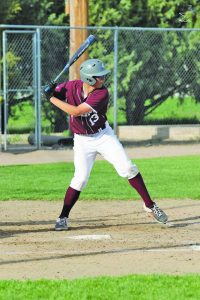 Photo by Angie Purdy – Berthoud’s Adrian Short batting in a game earlier this season. On Saturday, Short accomplished the remarkable feat of throwing a no-hitter against Mountain View to lead Berthoud a 1-0 victory over their conference rivals to the north.

Baseball is perhaps just as challenging mentally as it is physically, and it is on that mental side where both Kouns and Short himself credit the success the latter has earned this year.

“I think a lot of it just comes from experience; when I came out here sophomore year, I was young and felt like I didn’t have enough experience under my belt, I didn’t have the killer instinct,” Short said. “But this year, every time I step on the mound I just want to attack and I have the confidence to get after it, it’s all a mentality and I just come with that and it’s made huge waves in my performance.”

“It’s all between the ears too, every time he has been out, he has thrown us a dominant game, he has lots and lots of confidence on the mound,” Kouns said. “When he takes the ball for us, when he is pitching, he has been nothing but dominant for us. It has been a special season for him and, this was a special, special game.”

Short is a rare breed as a high school pitcher who can throw, and throw effectively, four different pitchers. Short’s repertoire features a fastball, changeup, curveball and, not commonly seen at the high level, a cutter, which Short said he just began using recently. “I love the little bite it has, it gets it off barrels,” Short said of his cutter.

His approach on the mound is the tried and true formula – mix speeds, hit your spots, keep the hitters guessing and rely on good play from the defense behind you on the rare occasions the ball gets put in play. Short’s rapport with catcher Matt Jorissen, the two have been playing together for a decade, only helps matters.

“I think it’s key to just mix speeds and get hitters off balance and that’s what it’s all about, I’ve been able to locate all of them really well, they’ve been working really good for me this season,” Short explained and was highly complimentary of Jorissen’s role in the no-no saying, “His knowledge behind the dish is unbelievable, he knows how to read a hitter when they step up there and he really calls a great game. We have such a connection, he knows me and I trust him with his calls, it’s just a huge thing to be able to work with somebody like that.”

Short was not far from a perfect game, the two walks allowed both came after running the count full, with Kouns saying of his ace, “Had he not gotten squeezed, the two walks he had were both on 3-2 pitches and he threw them strike three.”

Unfortunately, Berthoud was unable to use the momentum generated from the in over Mountain View in a Tuesday night doubleheader. The Spartans dropped games to Severance, 11-0, and then to Fort Morgan, 6-4.

The two losses frustrated Kouns who said, “It’s disappointing because we have an effort we had on Saturday and you would think that would motivate us and we came out today and weren’t ready to play, you know what, part of that has got to be on me, I’ll take my part, we are going to be better.”