Spartans go down fighting to Mead

Mead defeat comes down to last play for Berthoud 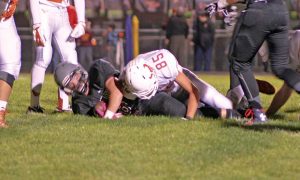 Berthoud running back Jimmy Fate punches in a touchdown for the Spartans during the first period of the 21-18 loss to Mead at Max Marr Field at Berthoud High School on Oct. 23.
Jan Dowker / The Surveyor

One of the most painful lessons to learn in life is that sometimes even one’s best is not enough.

In losing 21-18 to Northern League rival Mead on Oct. 16 at Max Marr Field in what could not be classified as anything other than a must-win game for both teams, the Berthoud High football team likely had to come to terms with that very cold, painful reality.

While Berthoud did not play flawlessly, they certainly did not play badly. The Spartans did not turn the ball over and were flagged for penalties a season-low three times. They forced a Mead turnover – an interception snagged by safety Chad Ellis in the end zone late in the first half – and were awarded four points on a pair of safeties thanks to bad snaps by the Maverick offense.

Yet, they came up short; in the words of Head Coach Troy Diffendaffer, “When the rubber hit the road we couldn’t get it done … that was the difference in the game. They fought through some of their adversity and we weren’t able to capitalize on it.”

Three of Berthoud’s five second-half possessions ended with a turnover on downs, all deep in Mead territory. A fourth ended with a game-winning pass attempt falling incomplete in the end zone as time expired.

“We’ve got to find a way to finish when we get down there,” Diffendaffer said after the game. “We came away empty all three times; we move the ball up and down the field and we just didn’t finish.”

Berthoud tailback Jimmy Fate scored a pair of touchdowns, the first on a one-yard run on the game’s first possession and the second when the senior received a pitch from quarterback Cody Braesch on an option play, to give Berthoud a 16-7 lead with 1:51 remaining in the first quarter. Yet Fate’s second first-quarter touchdown was the last time the Spartans would cross the goal line.

After a 26-yard kick return by sophomore Tyler Keys to begin the second half, the Mavericks drove 46 yards on seven plays and scored on second-and-goal from the Berthoud one on a quarterback sneak by Riley Glynn. The touchdown, and subsequent extra point, gave Mead a 21-16 lead with 8:17 left in the third quarter.

Each of Berthoud’s next three possessions ended with the Spartans failing to convert on a fourth down. The last, coming with 10:10 left in the game and following the second Mead safety, ended at the Mavericks four-yard line with an incomplete pass. Trailing by only three, 21-18, Berthoud had the option of kicking what would have been a 21-yard field goal, but the Spartans, after a timeout, opted to go for six.

Fate, who finished the game with 77 total yards, the two scores and seven tackles, said his team’s inability to get into the end zone in the second half was simply a result of poor execution.

“I think we left everything out here, I don’t ever question our team’s effort … it’s hard though when you get inside the 10-yard line three times and don’t score any points, it’s hard to beat a good team like this,” the senior team captain explained. “You’ve got to execute down there to win these big games”

Mead was able to chew 7:19 off the clock on their next two possessions, but another bad snap on fourth down with six seconds remaining, allowed Berthoud one final attempt to win the game. Braesch’s Hail Mary pass into the end zone, in the direction of Ellis and a contingent of Mead defenders, fell to the ground, preserving the win for the visiting Mavericks and dealing a crushing blow to the Spartans’ playoff hopes.

“I don’t think you can really pick any one thing. We’ve just got to find an identity as an offense, especially in the red zone; we’ve got to find our identity down there,” Fate said after the game.