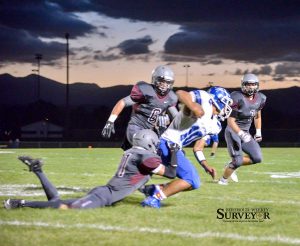 While the offense works to gain its footing, the Spartans defense has been downright dominant, allowing only seven points while registering 10 quarterback sacks and five takeaways through three games. Sept. 18’s homecoming game against Fort Lupton was no exception. Berthoud won in shutout fashion, 24-0.

“The guys just fly around to the ball, they get as many hats to the ball carrier as possible,” Berthoud Head Coach Troy Diffendaffer said when asked about his team’s defense after the game. “We were able to control the line scrimmage, they couldn’t run on us … once we got the containment going on the edges we were set.”

Aside from a few big plays in the first half, Fort Lupton was never able to generate any offensive momentum.

Where Berthoud did help out the Blue Devils’ offense, however, was by committing needless personal foul penalties. The Spartans were flagged 10 times for 140 yards, giving free yardage and extra downs to Fort Lupton. On two separate occasions, penalties negated long punt returns by Berthoud’s Jackson Hall and another reversed a would-be touchdown on the Spartans first possession of the second half.

“I’ve had it with our personal fouls, that stuff has got to stop and has got to stop now,” a clearly irritated Diffendaffer explained. “That’s the sign of a very undisciplined football team … that’s just not what we’re trying to do, we’ve got to clean that up and that falls on me.”

“We’ve got to be smarter; we preach play to the whistle but not after the whistle,” said Berthoud inside linebacker Jamie Gray.

Gray, who along with fellow linebacker Jimmy Fate and defensive lineman Ben Douglas and Steele Castles, seemed to virtually live in Fort Lupton’s backfield throughout the game. Gray tallied a team-high six tackles and a sack on the night, while Castles also registered six tackles and three quarterback sacks.

“I’ve got to give it to my defensive line, they really dig the trenches out there and I wouldn’t be able to do anything if they weren’t there in front of me,” Gray said, explaining he got a feel for Blue Devil quarterback Patrick Vasquez’s cadence, allowing him to anticipate the snap and attack the line of scrimmage.

“I was just trying to time up the snap count and use good technique to get through those blocks,” Gray said.

Berthoud’s offense was a different story, however. The Spartans were uncharacteristically sloppy, with a number of dropped passes, missed throws and three turnovers, two on downs and another on a fumble lost. 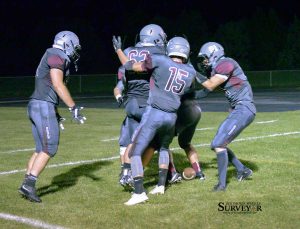 Berthouds Ben Douglas is congratulated by teammates after intercepting a blocked pass in the end zone for a touchdown vs. Fort Morgan on Sept. 18.
John Gardner / The Surveyor

After Berthoud quarterback Cody Braesch hit tight end Mccallan Castles for a 14-yard touchdown on the game’s opening possession, the Spartans did not return to the end zone until the 3:01 mark in the third quarter, when Steele Castles blocked a Fort Lupton punt that was recovered and returned by Douglas for a score that put Berthoud ahead, 12-0. After the opening possession touchdown, Berthoud only possessed the ball three more times in the entire first half. Diffendaffer praised Fort Lupton’s ability to control the clock and keep the ball out of the Spartans hands, particularly in the first half.

The Berthoud offense did not score again until 7:38 remained in the game when Braesch found Hall for a 28-yard catch-and-run. Hall, who has found the end zone in all three of Berthoud’s games this season, finished the night with a team-high six receptions for 50 yards. Braesch, who finished the game with 208 yards and a pair of touchdowns through the air, scored on a 20-yard scramble with just 35 seconds left on the game clock.

Asked why the Berthoud offense was not its usual potent self, Diffendaffer said he was unsure.