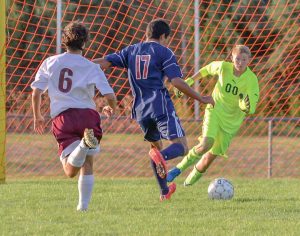 Berthoud goalkeeper Hunter Hursey will be an anchor for the young Spartans team this year as they look to climb in the Tri-Valley standings.
Surveyor file photo / John Gardner

The past couple of years have been a bit of a struggle for the Berthoud High School (BHS) boys soccer team, as fifth-year head coach Jason Hughes has been forced to play a large number of underclassmen after a mass exodus of seniors in 2013.

The bad news is the team went winless in 2014 and only mustered two wins last year, yet the good news is through those growing pains the boys have gathered a wealth of varsity experience traditionally reserved for juniors and seniors.

The Spartans will once again be young, with only one senior, team captain Jaden Rink, an abundance of juniors as well as a couple of sophomores who Hughes figures to see the field. In fact, eight of the 11 starters return from last season.

The net will once again be protected by junior Hunter Hursey, with captains Ben Marquardt and Tyler Markell, both juniors, also projected to have stellar seasons. Last season Markell led the Spartans with 14 goals, while Marquardt was forced to miss almost half of the season with a concussion.

Hughes is excited to have Marquardt back, who will team with Markell and junior Tate Rees, to offer Berthoud’s offensive punch. Meanwhile, on the defensive side, Hughes labels junior Kole Wysock as the “anchor who really controls the backline.”

Hughes said he is “very optimistic” about the 2016 soccer team that will once again compete in the Tri-Valley conference which adds this year rival Roosevelt, that moves up after playing the past couple of years in 3A. Hughes believes Skyline will once again be the team to beat (15-2 last year, undefeated in conference) with Windsor and Holy Family also being contenders. After that, Hughes observes plenty of “middle of the pack” teams, citing a fourth-place finish not out of the question.

“The big thing is we want to improve every game – that’s the main thing I want to see,” Hughes said. “These kids have put in a lot of time, a lot of hard work, to get where they are and, hopefully, they have learned a lot over the past two seasons; learning the hard way.”

Hughes saw very good interest for summer workouts, including a team camp at University of Colorado at Colorado Springs, though Hughes acknowledged several teams in the conference have twice as many club players.

“A lot of these teams (in the conference) have 12 or 13 club players. We have about five. We have kids who only play three months out of the year versus teams where the majority of the starters play all year-round. It’s nice to see (the players) work hard and not give up on themselves.”

The Spartans officially kicked off fall practice Aug. 15. The season begins with non-conference matches at Northridge (Aug. 29) and Westminster (Aug. 31) before returning to Berthoud for their home opener Sept. 3 versus Mountain View.

“The good thing about this year is, not only have we matured mentally, but also physically,” Hughes concluded. “We’re starting to get to the size we need and speed [to compete]. [Assistant coach] Trent Markell and I are excited about this season.”