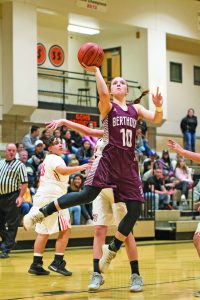 Photo By Lance Elmore Blink Photography – Berthoud’s Sydney Meis goes up for a shot against Greeley Central last Friday in the second round of the 4A state playoffs. Berthoud’s season came to an unfortunate end in a 65-53 loss.

Berthoud High School head girls basketball coach, Alan Gibson, challenged his team before the beginning of the season to climb the ladder. By measure of where the team entered the state playoffs – as the No. 17 seed in the 48-team bracket – the team ascended upward from last season’s No. 29 seed.

And even though the Lady Spartans season ended earlier than they had hoped, with a 65-53 loss to Greeley Central in the second round of the 4A state playoffs last Friday in Greeley, it would be hard to judge the 2017-18 season as anything other than an unqualified success. Perhaps most importantly, Berthoud will only be losing one starter to graduation and will return a core of players who developed invaluable on-court chemistry and thrived in Gibson’s up-tempo scheme this year.

In what was their final game of the year, Berthoud was never able to get into rhythm offensively or establish any lasting momentum, as Central junior Naomi Hidalgo carried the Lady Wildcats with 32 points and 11 rebounds.

The Lady Spartans began the game strongly; six points in the paint from junior Logan Davidson and three-pointers from Emily Cavey and Bre Fowler saw Berthoud sitting on a 15-10 lead after the opening eight minutes of play. But Hidalgo showed some flashes of what she would do all night long, scoring six in the paint of her own as Central continually used their girth to get down low for high-percentage shot attempts.

While Berthoud was able to slow down, if not stop, Central’s offensive attack, they struggled to get shots to fall on their end of the floor. The Lady Spartans missed their first seven shot attempts in the second quarter and finished with only four made field goals in the period. Central went on a 7-2 scoring run to take a 21-20 lead at the 3:51 mark in the second quarter. A last-second jumper from junior Sydney Meis gave the Lady Spartans a boost going into the locker room at halftime with just a three-point deficit, 29-26.

Meis quickly scored another four points in the opening minute of the second half. A jumper from Cavey and a lay-up from Fowler followed, and Berthoud was briefly able to take a 34-31 lead with 5:22 left in the third. Yet the Lady Wildcats clawed their way back, eventually taking a 37-36 lead at the 2:47 mark that they did not relinquish for the remainder of the game. Central went on to score 36 points in the second half to Berthoud’s 27 and ended the Lady Spartans season.

When all was said and done, Berthoud shot only 36 percent from the floor and 50 percent from the line, both marks which ultimately made the difference in the game. The Lady Spartans 53 points was one of their lower scoring outputs of the season and well below their 61 points-per-game average.

Cavey finished the night with a double-double, pacing the Lady Spartans with 18 points and 11 rebounds, Meis added 14 points and four assists, while Davidson chipped in another 10 points and grabbed six boards.

While five seniors will be lost to graduation, including a pair of three-year letterman in Ashlee Burdette and Caisey Ellis, Cavey, Davidson, Meis and Fowler will return next season to comprise the core of a team that will have state championship aspirations.