All good things must come to an end. The 2021-22 basketball season was no doubt a good one for the Berthoud High School (BHS) girls basketball team but unfortunately the season came to an end on Tuesday night against Mullen in the Sweet 16 round of the 4A state playoffs.

Berthoud, after enjoying a bye for the opening round of the postseason, handily defeated Mesa Ridge last Friday night, winning 66-21 behind a defensive performance for the ages, to setup the game with Mullen, the No. 2 seed in the bracket, who won the game 77-31. 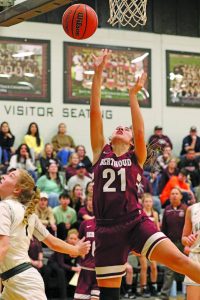 Photo by ACP Media Berthoud senior Ally Padilla goes up for a lay-up in a game earlier this season. The Lady Spartans turned in another strong season, advancing to the 4A Sweet 16 round of the state playoffs but unfortunately lost to No. 2 seed Mullen on Tuesday night.

In facing Mullen, the Denver-metro based school which plays against a schedule of mostly 5A teams, including Cherry Creek, Cherokee Trail and Grandview, among others, which draw from the wealthy southern suburbs but Mullen is allowed to play in the 4A playoffs due to rules set forth by CHSAA. Mullen took control early in the game, building a 27-2 lead in the first quarter and a 41-10 lead by halftime on their way to the 46-point win.

The game was as lopsided as Berthoud’s final win of the season which came Friday in front of a large home crowd against a Mesa Ridge squad who handed Berthoud their first defeat of the season back in December.

“We did learn from playing them the first time,” Berthoud Head Coach Alan Gibson said after the win. “We knew that we couldn’t get beat inside, No. 23, their lefty inside, really hurt us down low the first time so we were aware of her and No. 3 is an absolute player, and we knew if we could control those two tonight that our chances would be pretty good.”

Berthoud got off to a red-hot start. Senior Anndee Davidson drained two three-pointers in the first quarter and Carly Fischer added another as the Lady Spartans took a 19-4 lead. The second quarter, however, went somewhat differently. Berthoud was able to muster only four points in the quarter – a basket from Fischer and two free-throws from Aidan Carr represented Berthoud’s total point production – but held Mesa Ridge to only two points.

“When you’re shooting as many threes, you have to bear with the misses but when you’re playing defense on the other end and not letting it affect your play, the girls know the shots that are good for them and that it’s okay to take them and come back and play defense,” Gibson said.

The third quarter saw the same stifling defense continue by Berthoud while their two most productive offensive players took over the game. Carr made good on a three-pointer, and and-one and another bucket while Ally Padilla cashed in on two threes and two twos and the rout was on. Berthoud held a commanding 54-17 lead by time the fourth quarter began.

“Our mentality was let’s get out, let’s get a lead early, let’s show them what they missed last time. We’re on our home floor, we have a great crowd, we showed them what we could do,” said Padilla, who led Berthoud with 20 points in what proved to be her final home game. “We had a lot of people were contributing tonight and in a lot of important ways, everyone was getting a piece of the ball and playing great defense, that’s when we play our strongest.”

The Lady Spartans have qualified for the basketball postseason in all five years of Gibson’s tenure and, despite the disappointing result in the final game, the team has much to look back upon with pride as well as a very bright future.