The Rocky Mountain West USSSA Baseball Colorado State Championships July 8-10 in Lakewood were bittersweet for the Berthoud Youth Athletic Association’s 14-year-old Spartans. After winning four games through two days of play the Spartans ended up losing the championships game against the Centennial Prospects, 16-1.

Head coach Jody Hardy was impressed with how well the boys played despite losing the championship game.

“I was really pleased with their effort,” Hardy said. “They pitched well, hit well, and we played really well and were aggressive at the plate.”

The Spartans won their first two games 10-2 and 5-2 in the first round. The team then defeated Power Alley White 14-3 and the Salida Sluggers 12-7 to make it to the championship game.

Referring to the championship game, Hardy said simply that the Prospects “played better than us.”

The championship game was the Spartans’ third game of the day on Sunday when it was close to 100 degrees. “The boys were pretty tired by that point,” Hardy said.

Finishing second in the state tournament was an accomplishment considering the interesting way the season began. According to Hardy, the team started out 2-6 through its first eight games.

“We really struggled early in the season,” he said.

But the team went 14-4 over their last 18 games to finish the season 16-10. They won the Longmont Slam Tournament and placed second in another tournament in Erie, which was a 16 team triple A tournament of higher level competition.

While finishing second at state may have been bittersweet it was nonetheless a commendable end to the season.

“It was a big accomplishment, for them to start out the way they did and turn it around,” Hardy said. “They just came together.” 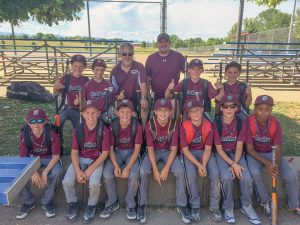 Coming into the second day of the Rocky Mountain West USSSA Baseball Colorado State Championships July 8-10 in Lakewood, the Berthoud Spartans 10-and-under AA team was confident, coming off two decisive victories the day before, to face the Colorado Lightning, a team from Fort Collins who’s also in their league. The Spartans had faced the Lightning twice this season already and had lost both contests.

“That was kind of a big game for the kids,” said Spartans head coach and Berthoud Youth Athletic director Jeff Jorrisen.

The Spartans started off well and built a good lead, according to Jorrisen, but the Lightning didn’t let up and came back within two runs.

“We got a big lead and let them back in it, but we held on in the end for the win,” Jorrisen said.

That game was the highlight of the tournament which the Berthoud Spartans finished in fifth place overall, with a 3-1 record.

“They were very excited,” Jorrisen said. “Having lost to them twice this season and meeting them in the tournament, and beating them, was sweet for the kids.”

The Spartans came into the state tournament after finishing first in their regular season play with a record of 17-9-1, 11-3 in league play and finished second in the end-of-the-season tournament in Longmont.

They came into the state tournament ready to play.

The Berthoud boys got off to good start Friday, beating the Greeley Royals 12-8 and then beat the Pueblo Browns 25-8. And those were two very competitive teams, Jorrisen said.

“They played great,” Jorrisen said. “Both those teams made to the final eight of state. We beat two good teams that day.”

The team was off to a 9-run first inning against Pueblo and then scored 11 more in the fifth.

The run differential doesn’t do the Brown’s any favors, because, according to Jorrisen, Pueblo is a good team. The Browns finished the tournament, right behind Berthoud, in sixth place.

The Spartans stepped up to the plate Saturday morning to face and scoring another victory, upsetting their league rival Colorado Lightning 13-11.

That set up a meeting with the Fountain Rising Stars, who finished the tournament in fourth place after defeating Berthoud in a close game, 14-12.

“The kids came out to an early 8-3 lead after two innings,” Jorrisen said. “But they just kept chipping away.”

In the last inning the game was tied 12-12. The Rising Stars earned two runs that sealed the game.

“I was so proud of them,” Jorrisen said. “From where we started to where we ended, they improved tenfold. The kids battled all year and got better and better.”

10 AA
Berthoud Spartans finished tied for fifth place with a record of 3-1.

9 AA
Pro Swing Orange finished tied for ninth with a record of 1-3.