No surrender for Spartans 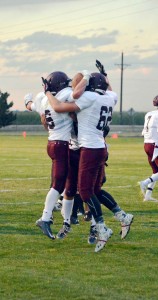 Berthoud running back Jimmy Fate, left, and offensive linemen Stephen Lockard, right, and Brendon Stanley, back, celebrate Fate’s touchdown in the first quarter of the Spartans’ victory over the Valley Vikings on Friday, Aug. 29 in Gilcrest.
John Gardner / The Surveyor

The Berthoud Spartans football team adopted a quote from the film “300”; a film about 300 Spartans fighting one million Persians in the Battle of Thermopylae. In the film, a Persian commander ordered the Spartans to surrender their weapons. The response from the 300 was “come and take them.” The Berthoud Spartans football team has adapted this motto this year “come and take” in reference to never surrendering. The coaching staff has a medallion they are awarding to players for extraordinary effort and it says “come and take” in English and Latin.

Last Friday night Berthoud lined up against the Valley High School Vikings who were very confident coming off a 43-7 thrashing of Estes Park. The Vikings out-numbered the Spartans players two to one, but like the 300, Berthoud took the fight to Valley with a “come and take” attitude from the opening whistle to the final horn that resulted in a 41-0 victory for the maroon and white.

Berthoud junior Jamie Gray had his finest game as a Spartan and he truly exemplified the “come and take” credo. Gray led the team in tackles at linebacker and solidified an offensive line at center that repeatedly gave junior quarterback Cody Braesch enough time to produce 315 passing yards.

The “come and take” warrior characteristic of a Spartan is an honorable attribute. It’s a commitment to not let your brother down, not surrender and to always have each other’s back. A great example of this commitment was with Gray who dislocated a finger during the game. He had the training staff take care it, tape it up and he was back on the field to rejoin his brothers against the Vikings.

Junior defensive end Steele Castles showed relentless pursuit that culminated in two momentum shifting sacks and he was second on the team in tackles.

Keep in mind this was a Spartans’ defensive effort that played shut-out football. That doesn’t happen without 11 players relentlessly pursuing the ball and taking care of business when they get there.

The defense focuses on what it calls “9-5-9”, nine players – within five yards of the ball – 90 percent of the time. Another great example of the growth of this team was on their first play. Valley’s leading running back Victor Delgado broke four tackles and still only gained six yards. Many times if a running back breaks that many tackles their racing for a touchdown. But not with this feisty and tenacious unit, who regrouped and stopped the Vikings stone cold on the next two plays and Valley was forced to punt. Three and out is a sweet sound to a defense and in this case it was a sonic boom.

Delgado, who rushed for 214 yards and three touchdowns the previous week, was held to only 35 yards against the indomitable Spartans.

When a team scores 41 points, the offensive line was doing some good things.

Offensively, Braesch had multiple offensive targets including Micol Woodiel, Jimmy Fate and Chad Ellis at running back and Ben Poirier, Jackson Hall and Matt Bonds at receiver. The offense started with their own sonic boom on the first play from scrimmage with a 76 yard scoring strike to Hall, that was followed by two more touchdowns in the air from Braesch first to Bonds and then again to Hall. The running game joined the scoring party with touchdowns by Braesch, Fate and Ellis. Braesch added a rushing two point conversion and senior kicker Kurt Hucal added three extra points.

Last Friday night was an opportunity for the program to show how they intend to play with a “come and take” swagger and mission. Berthoud usually doesn’t see a Denver area team during the regular season. But this week, the Spartans host the Arvada Bulldogs with the no. 1 ranked quarterback and the no. 1 and no. 3 ranked wide receivers in the state at 3A.

Friday night is another opportunity to show continued growth by making another statement on what kind of football team the Spartans want to be this year.