There really is nothing like the feeling when it all comes together.

And it is all really starting to come together for the Berthoud High girls golf team.

Battling gusty and unpredictable winds last Thursday at Eaton County Club in the Longs Peak League (LPL) meet, Berthoud had two players shoot the best competitive rounds of their high school careers, propelling the team to a stellar third place finish in the 10-team meet and furthering their argument as one of top programs in the region. 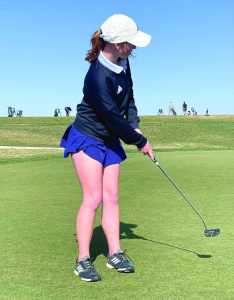 Photo by Dan Karpiel Berthoud – Golfer Anya Knoll watches as her putt rolls into the cup at the practice green at TPC Colorado. Knoll shot a career best 84 to take fifth place in individual scoring and helped lead the Lady Spartans to a third-place team finish last week in the Longs Peak League meet at Eaton County Club.

Berthoud was led by junior standout Anya Knoll, who carded an 84 to take fifth place in the 40-player field. The team was further bolstered by a breakout performance from sophomore Brooklyn Tychsen’s career-best 89, good enough to take seventh in induvial scoring. Junior Ashley Russell turned in another solid round, carding a 100, and sophomore Olivia Gravestock shot a 102 to round out Berthoud’s varsity foursome.

All four of the Lady Spartans’ scores are well-below the historic cutline for 3A state qualifying – typically around 110 – meaning Berthoud is well-positioned midway through the season to achieve their season goal of qualifying for the state meet as a team.

“What I am practicing is paying off, that feels good, and it feels good to know that it’s all coming together, Knoll said. “The mental game is starting to get as good as my actual golf game.”

Knoll began her round almost as well as can be expected, recording a birdie on the par-four first. “My approach shot really got that, I had like a four-foot putt for birdie,” she said. After the hot start, however, Knoll played the next two holes five-over, recording a bogey the par-three second and then an ugly quad on the par-four third.

It was then that Knoll remembered advice she had been given by Coach John Perry to approach the game, literally, one shot at a time. Using inspiration from a book Perry gave her titled ‘With Winning in Mind,” Knoll reminded herself to think of the good shots – such as her near-perfect approach shot on one – and almost immediately got right back on track, playing the next six holes just two over to make the turn at 41.

“I kept telling myself ‘process is primary’ that’s from the book, and I think of the good, that’s something I work hard on,” Knoll said. Three consecutive par fours open the second nine at Eaton, which Knoll played five over, but finished her round in stellar fashion, making par on five of the final six holes to post an 84.

Even after earning a place in state last year as a sophomore, Knoll has made tremendous strides in her game, consistently shooting in the 80s this spring despite routinely facing weather conditions – wind, rain, cold – that are far from conducive to low scores.

The ability to battle the conditions, as well as overcome the challenges that often arise in each round and remain at an even-keel, has been critical. Putting it all together is the key to taking the step from good to great.

Tychsen likewise admitted that she feels like her game is really coming together in all facets, not just the physical facets of the game but the metal ones as well.

“I feel like my hard work and my off-season practice is paying off. It has also ingrained more muscle memory to help me to be more confident competing,” said the sophomore. “I was not focusing on the negatives of my playing and let everything I have been doing wrong go, so the outcomes started getting better.”

The 89 by Tychsen was impressive not only as it represented the best score of her high school competitive career, but also because she was remarkably consistent throughout the round – a major factor in scoring well over an 18-hole round – and handled the gusty and unpredictable winds like a seasoned pro.

Said Tychsen, “I just knew I had to play through the wind, incorporate it into my play and remember to stay calm through the rough conditions.”

Despite far from ideal elements, Tychsen carded a birdie, four pars, seven bogeys and six double-bogeys; her highest score on any single hole was a six, a magnificent accomplishment considering both the challenging layout of the course as well as the winds. To close out the front nine, she rattled off four pars in a five-hole stretch with the only square on her scorecard coming on the par-four seventh.

“I am trying to stay consistent and know that I can rely on myself no matter what conditions come up or how I feel about my game,” Tychsen said.

While there remains work to be one by each golfer, the ability to battle the course, the conditions and the competition, will serve Berthoud well as they begin the second of their season. The Lady Spartans will travel down to Riverdale Knolls in Thornton on Monday for an LPL meet.