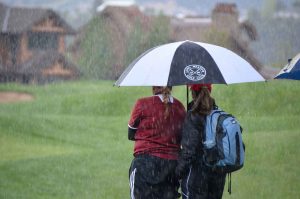 Berthoud’s Molli Boruff and coach Mary Durkin take shelter under an umbrella as the rain comes down on the 14th hole at River Valley Ranch in Carbondale Tuesday during the girls 4A State Golf Championship. The wet and cold weather made for some challenging golf at the state tournament.
Colleen O’Neil / Special to The Surveyor

Before Molli Boruff even laced up her golf shoes at this year’s girls 4A Colorado State Golf Championship at River Valley Ranch in Carbondale on Monday, she had already exceeded her own expectations for this season. So just getting to play River Valley Ranch alone was a treat for the Berthoud High School sophomore.

“Just getting to play out there, I don’t think I’d have had that opportunity if I hadn’t made it to state,” she said.

While the course may have been beautiful, nestled in the Roaring Fork Valley at the base of majestic Mount Sopris, it was one of the most challenging Boruff has played, she said.

“It was so pretty; it was hard though,” Boruff said. “The back nine was pretty tough, probably one of the toughest courses I’ve played.”

And the weather posed its own challenge as the field of 84 girls played Monday with temps in the 70s and not a cloud in the sky, compared to Tuesday when the rain and clouds came and temperatures were in the 40s.

Despite the bad weather Tuesday, Boruff played pretty well said Berthoud girls’ golf coach, Mary Durkin. Boruff finished tied for 44th place, shooting a 92 on day one, followed by a 97 on day two for a two-day total of 45-over-par 189. While that may not sound as good as she would have hoped for at first, considering she finished in the middle of the field as a sophomore is pretty remarkable for her first time at the state tournament.

“She was incredible on day one,” Durkin said. “For a sophomore, reaching state for the first time, the jitters got out and she made the turn after nine holes and she did wonderfully.” 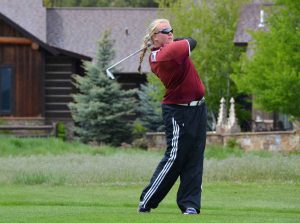 Berthoud’s Molli Boruff tees off on the 14th hole at River Valley Ranch in Carbondale Tuesday during the girls 4A State Golf Championship, before rain delayed the tournament for about half-an-hour. Despite the delay, Boruff finished the tournament tied for 44th place.
Colleen O’Neil / Special to The Surveyor

After day one, Molli was in 36th place. The weather was absolutely gorgeous, sunny and not a cloud in the sky Monday, but Tuesday was an entirely different story. Organizers discussed doing a shotgun start instead of tee times Tuesday because they knew the weather was going to come.

Boruff started day two at 8:39 a.m., Durkin said. She got through nine holes in good weather, shooting a 47 on the front nine. After the turn the rain started and Boruff played the back nine in rain, sometimes hail. She made it through hole 15, but then lightning caused an evacuation of the golf course for about a half hour, Durkin said. Boruff had three holes remaining in the round and the delay and cold weather made it a little tough getting back into the swing of things.

“I’ve played in pouring rain before, not in tournaments though,” Boruff said. “It was so nice [Monday], then [Tuesday] playing in the rain and then getting delayed and having to go back out and finish three holes, it was tough.”

One of the girls playing in Boruff’s group actually ended up withdrawing from the tournament and didn’t continue after the delay, Durkin said. Boruff, however, did finish; double bogeyed 16 and finished with two bogeys on the last two holes.

Getting going again after the delay was just another challenge.

“You’re not as warm as you were going into the hole,” Boruff said. “So you have to get your game back on and it’s kind of hard getting going again.”
But playing in the state tournament for the first time is a learning experience if nothing else. Boruff knew that going in and she took it all in.

“I was a little bit nervous because I didn’t know what to expect. I just went out there for the experience and I was thinking that next year it will be a whole lot different,” Boruff said. “I just went to see what it was like and now I’ll be a lot more prepared for next year.”

Seeing firsthand the level of competition, as well, will better prepare her for next year. The level of competition at the state tournament is extremely high, but with the adverse weather the entire field seems to suffer a little. Only the tournament leader, Jefferson Academy’s Jennifer Kupcho, finished the two-day tournament under par. Kupcho shot a 5-under-par 139 for the two rounds. To put that into perspective, second place was 10 shots behind Kupcho. From there the field was pretty evenly mixed.

“I knew that they were going to be a lot better than what we’re used to, and I was surprised at how many good girls there are out there,” she said.

Skyline’s Laci Williams finished with a 44-over-par to end the tournament one place ahead of Boruff in 43rd place. Skyline’s Grace Gunlikson, who’s been one of Boruff’s toughest opponents all year finished tied for 55th place, finishing with a plus 58 for the two-day tournament.

This season, Boruff consistently finished near the top of the leaderboard and even won two tournaments; she managed to finish in second place during the Berthoud Tournament at the Olde Course in Loveland in April that suffered a last minute venue change as well. She also received All-Conference honors this year. Making the state tournament was just the icing on the cake for a season where Boruff exceeded her own expectations. She said that winning two tournaments this year was her biggest surprise.

“I just went out there to play and didn’t expect to win,” she said. “But I ended up winning a couple of tournaments and I made All-Conference, too, so it was pretty cool.”