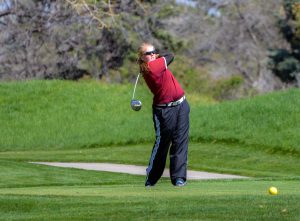 Molli Boruff tees of on the par 4, 12th hole at the Olde Course in Loveland on April 28.
John Gardner / The Surveyor

One of the most valuable lessons sports teaches a young person is how to overcome adversity.

Less than 24 hours before they were set to tee off, the collection of prep golfers that were set to compete at Mariana Butte Golf Course in Loveland for the Tri-Valley League Meet were informed they would instead play at the Olde Course.

The venue change did not affect Berthoud star golfer Molli Boruff, twice a tournament champion this season, as the sophomore took home second place with a 94.

Boruff admitted that finding out she would play at the Olde Course instead of Mariana Butte, where her and her father played a practice round on Sunday, did throw her for a loop but she knew she would just have to deal with it.

“I had mentally already prepared to play each hole at Mariana and here it’s a lot different,” Boruff said. “I’ve played here before but not as much as I’ve played at Mariana…I said, ‘I can’t change it, I can just control my attitude and my effort.’”

The Olde Course, with its narrow, tree-lined fairways puts a premium on driving accuracy that Boruff was more than able to meet. The sophomore hit five of seven fairways off the tee on the front nine on her way to shooting a 46. She was frequently a recipient of praise from her playing competitors for her length off the tee.

“I’ve worked extremely hard with my driver,” Boruff said, “Last year I didn’t hit with my driver because I just started and every time I hit with it I would go really far right, so I practiced all summer and fixed swinging left with my shoulders and that’s been helpful.”

Boruff admitted that the struggles of all three players on 12 threw her off her rhythm.

“Whenever we have to wait that long I start to think too much,” Boruff said. “I start to focus on my swing and what I’m doing wrong and I know I shouldn’t do that.”

After taking 19 strokes through the tough 12-13-14 stretch, Boruff found her groove on the final four holes of the round with her driver and her putter doing the lion’s share of the work. Boruff took just seven putts on the final four holes, carding a two-over 18. Her drives on 16 and 17, the longest and most difficult hole on the course, both found the center of the fairway and set up her approach shots.

Boruff’s second shot on the par 4, 16th came up just short of the green, but a perfectly-executed chip shot put her ball within six feet of the cup. She drained her putt for par, her first par since the fourth hole. She repeated par on 17, two-putting to card a 5.

“I just said, ‘finish strong and play your game for the last few holes because you can’t go back and change those ones before,” Boruff said. “It gave me a lot of confidence to finish strong.”

As a team, the Lady Spartans claimed third place with a collective score of 300, just three strokes behind second-place Windsor (297). The Skyline Lady Falcons won the team portion of the meet with a 288. In addition to Boruff’s 94, Kyra McDonald turned in a 100, Mikaela Matzen shot a 106, Katie Rice a 109 and Shannyn McEntee turned in a scorecard with a 113.

Berthoud will play a nine-hole makeup match this afternoon at Highland Meadows and on Monday afternoon competes at Regionals at Boomerang Golf Links in Greeley.

Niwot’s Adara Pauluhn topped the leaderboard with an outstanding 3-over-par, 75.