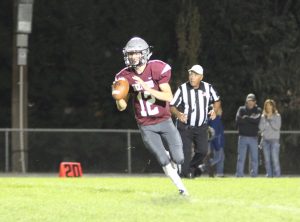 Berthoud quarterback Brock Voth, after scrambling out of the pocket, looks downfield and prepares to throw a pass. Berthoud won their homecoming game by a 36-3 final over Centaurus on Friday.

“In all honestly it just feels great, we basically went out there all just saying ‘win this for Gabe,’ he meant so much to all of our hearts. I literally spent half the day crying because of it. This meant a lot to us,” said Berthoud High School (BHS) tailback A.J. Anema, referencing the passing of BHS senior Gabe Archuleta, while Anema and his teammates celebrated their 36-3 homecoming game win over Centaurus at Max Marr Field last Friday night.

“It was rough during the day … as we got down to pre-game, we started talking about it, remembering last week. Gabe was that first guy who ran onto the field to congratulate us and when you go to start honoring people you do it by giving your 100-percent effort,” Berthoud Head Coach Troy Diffendaffer said after his team’s win.

And give their 100-percent effort the Spartans did. For the third time in as many attempts, Berthoud dominated in all phases of the game. It was the Berthoud defense, however, that shined brightest. In addition to allowing Centaurus to score only three points, the Spartans forced five turnovers, sacked the two Warrior quarterbacks who played three times and allowed only 248 yards of total offense.

Centaurus was only able to muster one drive of significance in the game, a 13-play, 65-yard effort that bridged the first and second quarters and netted the Warriors only points of the game. Yet even after the 37-yard completion that set Centaurus up with a first-and-goal from Berthoud’s eight-yard line, the Spartans defense came up big. Anthony Trojahn forced a two-yard loss on first-and-goal, and on third down senior cornerback Jake Yuska broke up a pass to force the Warriors to settle for three.

“That’s the premise behind the defense we run; you can drive all the way down the field, but we will capitalize when you make a mistake or when there’s an inopportune moment,” Diffendaffer said.

Prior to the Centaurus field goal, Berthoud had taken a 14-0 lead thanks to scores from Anema and Cooper Stratmeyer, the latter setup in part thanks to a long run from quarterback Brock Voth on a third-and-17. “It was all my blockers really, my lineman did such a great job, I can’t really run without any of them doing their jobs so, I mean, they kept their game up and I just did what I could do,” said Anema, who finished the night with 68 hard-fought yards and a score as part of a crowded Berthoud backfield.

The Spartans scored their third touchdown of the first half when Voth found Jake Rafferty on third-and-goal from inside the Warrior five after Danny Pelphrey gained 35 yards on a fourth-and-four to setup the goal-to-go situation for Berthoud.

Holding a commanding 21-3 lead at halftime, a lead that would have been larger had a late second-quarter pick-six from Berthoud strong safety Wyatt Woodrick not been called back on a penalty, Berthoud changed up their defense, dropping seven or, at times, even eight players into coverage.

“They wanted to run the ball and we were able to stop it with just our four down lineman there and then when they had to start throwing we changed packages again,” Diffendaffer explained. “We went to a whole different defense in the second half, especially in the fourth quarter, we dropped eight. When our hogs up front can still get pressure with three guys rushing it’s going to be nice for those guys in the back.”

The plan worked wonders as Justin Bauer intercepted a pass at the beginning of the fourth quarter while Yuska snagged three picks in the fourth, the second of which he returned 45 yards for a touchdown that iced the game for the Spartans.

“Throughout practice, just with platooning, we’ve been able to see a lot more routes ran on us, and tonight, the d-line and the ‘backers were really bullying (the Centaurus) o-line and forcing passes to come out when I’m sure they weren’t timed that way and just made it easy on me,” Yuska explained of his three picks. “We always play inside leverage, so I was already set up there, so it just gave me a little advantage there. I read it right and it worked out.”

Berthoud (3-0) currently holds the No. 4-rank in 3A RPI but will get a tough test on Friday night when perennial contender Fort Morgan (2-1) pays a visit to Max Marr Field at BHS. Kickoff is set for 7 p.m.