Another chapter for improving Spartans 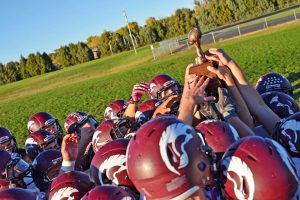 The Spartans hoist the Longs Peak trophy after winning the game against Mead last week. The team received the trophy after practice on Oct. 13. John Gardner / The Surveyor

A new chapter was written for the Berthoud High School Spartans football team (6-1) last Friday in Mead. The storyline included being down by two touchdowns, taking the lead, and then falling behind again, only to win in the final minute of the game. The 28-21 victory over a talented and well-coached Mead team, fighting for a win on an emotional Mavericks homecoming night, is part of the evolution of the Spartans football program.

I know from a personal standpoint in dealing with my own children, every time throughout their young lives, once they’ve achieved something, I’ve always said, “Now you know you can do that, and can know confidently that you can do it again.”

In learning their own lesson, the Spartans did something Friday night that all good football teams do – come from behind to win. If they are put in this position again, they will be confident that they can earn and deliver the same result. 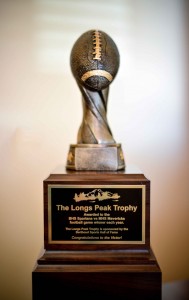 The Longs Peak trophy will be presented to the winner of the Berthoud vs. Mead football game each fall.

If Berthoud aspires to be an elite team, the lessons learned Friday night are tremendous building blocks. However, the very best teams keep adding winning characteristics to their resume as the season progresses.

One critical aspect of the Spartans game that needs to come together is playing four quarters of relatively mistake-free football. If the Spartans can play a clean game with sound execution, being one of 11 doing his job, and eliminate the penalties that can ultimately cost their team the game, the sky’s the limit for this team.

The Spartans not only found the will to win an important Northern League game that keeps them in the hunt for the league championship, but also earned the inaugural Longs Peak Trophy. The Longs Peak Trophy, sponsored by the Berthoud Sports Hall of Fame, is a perpetual trophy given to the winner of the game between Berthoud and Mead.

Next up for the Spartans is the Frederick High School Warriors (0-7) on Oct. 17 at Max Marr Field. The Warriors are always a physical team that brings tenacity to the game and will be the toughest team without a win the Spartans have ever faced. This is another key game for Berthoud, who is vying for the very competitive Northern League crown, with an exciting final three games left on the schedule. Four Northern League teams; including Roosevelt, Northridge, Holy Family and Berthoud, all still have a chance to win the league title.

With 70 percent of the season completed, the community, school, and Spartans fans are proud of this team. But from the look in the eyes of the players and coaches, the best is yet to come for these young men who play under the Friday night lights and represent the 80513.