Halloween proved to be downright scary for the Berthoud High football team as they traveled out east to Severance for a meeting with the Silver Knights. The game went decidedly in Severance’s favor as they handed Berthoud their first defeat of the season, 42-6. 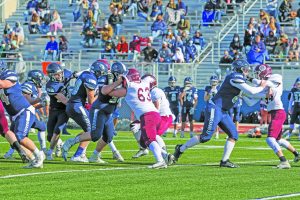 Photo by Angie Purdy – Berthoud defensive tackle Peter Bullet (63) gets penetration against the Severance offensive line in Saturday’s game. While Bullet, with two tackles and a sack, was one of several Spartans to turn in a solid showing, Berthoud lost by a lopsided 42-6 final.

Unfortunately for Berthoud, the team had trouble getting out of their own way, turning the ball over a whopping six times. Head Coach Cory Ticnor, who was understandably disappointed with the loss, explained “We had a problem hanging on to the football, when you have six or seven turnovers, you’re going to have an uphill battle, we were our own worst enemy.”

The turnover issue was a problem for the Spartans last season but, prior to Saturday’s game in Severance, the team had been for the most part sure handed in their first two games of the 2020 season, both wins. Berthoud threw three interceptions on the afternoon and lost three more fumbles. The turnovers gave Severance not only some momentum but also short fields. Two Berthoud turnovers came on the heels of defensive stops, making the mistakes all the more deflating for the Spartans.

The Silver Knights scored twice in the first quarter and a third time in the second to take a 21-0 lead into the halftime break. Berthoud did respond by putting six on the board in the third quarter, but Severance added 14 of their own and a final touchdown in the fourth to take the game by the comfortable 42-6 final margin.

Severance sophomore quarterback Nolan Hertzke completed only nine passes on the afternoon but went for 275 yards and four scores while the Silver Knights’ ground game was equally stout, tallying 136 total yards on 29 total carries. Severance receiver Joseph Tamburro did most of the damage for the Silver Knights on big plays as his three receptions went for 172 yards and a pair of scores.

The loss comes on a short week for Berthoud, who had won a double-overtime thriller against Brush just five days prior in frigid temperatures. While Ticnor acknowledged that playing a game on just four days rest was not optimal and something with which he and his staff had no prior experience, he refused to make excuses saying simply, “We need to work on some ball security with our skill positions, we can’t make the mistakes we did. Credit to Severance, they played well but we can’t make the mistakes we did.”

There were bright spots to be found for the Spartans, however. Junior wide received Jayden Hedelius hauled in eight receptions for 77 yards, his second strong showing of the week. Star senior linebacker and team captain Austin Burdette led Berthoud with 14 total tackles, two of which came for a loss. Peter Bullet and Jake Giles each also recorded sacks and Shawn Phipps forced two Severance fumbles.

The Spartans (2-1, 1-1 conf.) will face a stiff test this Friday night when they will welcome undefeated and No. 1 ranked Resurrection Christian to Max Marr Stadium in Berthoud. Due to the COVID issue that resulted in the Berthoud/University game initially scheduled for Oct. 17 getting cancelled, Ticnor said the team hoping to get a make-up game scheduled after the conclusion of the regular season following the team’s Nov. 12 contest against D’Evelyn.