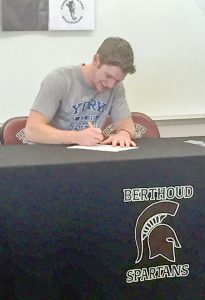 Throughout his senior year, Berthoud High School’s Patrick Barron watched as 14 of his friends, teammates and classmates signed letters of intent to compete as NCAA athletes. But Barron, a three-sport athlete (football, basketball, baseball) who graduated in May and knew he wanted to play baseball at the next level, did not receive the level of interest the others did.

“Seeing everyone sign, I was still in the midst of not knowing what I wanted to do. I knew I wanted to play baseball but I didn’t know if it was possible, if there were any connections I would get,” Barron explained. “It was kind of a letdown, seeing all these different people sign their letters of intent, all my real close friends, watching them do that was something I wanted to do, something I wanted to look forward to.”

Yet even after a stellar senior season on the diamond where Barron, the team’s every-day catcher who took home Tri-Valley (TVC) All-Conference honors, was a huge part in achieving the Spartans’ first winning season in over a decade, graduation came and went without any scholarship offers. Batting in the two hole, he finished the year second on the Berthoud squad in total hits (21) and on-base average (.472) and was third in batting average (.362) and RBI (13) while also finishing third in the entire TVC with a standout .988 fielding percentage. He demonstrated soundness behind the plate and worked well with the Spartans’ pitchers, two of whom finished in the top five in the TVC in strikeouts.

So, without any offers, Barron planned to attend Colorado State and study civil engineering, but kept working out, hoping to make a connection that would afford him the opportunity to chase his dream of playing college ball. In the beginning of June that opportunity presented itself.

Explained Barron, “I started working out with this baseball trainer, and he had a bunch of connections and stuff and after one workout he was all, ‘oh yeah, I’ll call some schools for you, try to get your name out there,’ and I think we had like six calls within three days from all these different schools.”

After narrowing the list down to schools that offered both the engineering major he sought and had a decent baseball program, Barron took a couple official visits and decided on York College in Nebraska. “I honestly just loved everything about it from the school, the major, I got to know the coaches, and I really liked all of them,” Barron said. “The feel was just right.”

Barron will catch for the Panthers and pursue a course of study in engineering. He explained the biggest lesson he has learned through the nearly year-long endeavor has been one of patience and perseverance. “The ability to persevere and be able to push through anything … just putting 110 percent effort all the time,” he said. “I just kept pushing hard to get into school, to get into college, trying everything I could do. I knew that if I tried hard at anything it could come through in the end and I’d be happy with the outcome.”

The perseverance Barron demonstrated throughout the process will unquestionably aide him, not only on the diamond but afterward, when he has taken off his catcher’s mask and shin guards and finds himself in the York engineering lab working on statics problems and solving differential equations until 3 a.m. Among the many, that is perhaps the most important lesson young people learn through athletics.