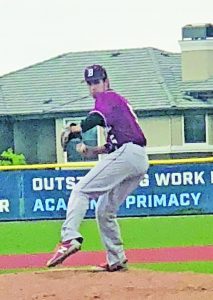 While the 18 hard-nosed competitors that comprise the Berthoud High School (BHS) baseball team were disappointed when they walked off the field at Valor Christian High School in Highlands Ranch after being handed an 11-4 defeat that ended their postseason run this past Saturday, the group quietly exuded a collective sense of accomplishment.

As well they should. The opening game of the regional tournament, a 6-4 defeat of Thomas Jefferson behind a for-the-ages performance from starting pitcher, Chris DeSousa, marked the Spartans first playoff appearance, and first playoff win, since 1999.

“I’ve told kids that played for me before, they’re all part of it, it takes time to build, and it takes time to change that culture and the magnitude of this is really, really big,” Berthoud Manager Buddy Kouns said. “This happened because we have quality kids and we have quality families, and I’m just thrilled they got to take this ride and that they took me on the ride with them.”

DeSousa turned in a stellar performance on the mound, allowing Thomas Jefferson to scatter just three hits and earn three walks while not allowing a single earned run and striking out a BHS postseason record 15 batters in his six innings on the mound.

“Chris just dominated them,” Kouns said of his ace’s performance. “He was masterful, they did a nice job scratching a few runs out on us when we made a few mistakes, but Chris just over-matched them, he was in control.”

DeSousa got some early run support from the Berthoud offense. Tristan Workman came home to score on a double to deep right off the bat of Quinn Oliver, and the Spartans just missed out on a second run on the play when Brent Fowler was thrown out at home plate. Oliver scored when Jake Yuska singled to give the Spartans a 2-0 lead.

DeSousa explained he was, “a little nervous,” to begin the game, but Berthoud’s two early runs helped him settle in and focus on attacking the Thomas Jefferson batters. The early lead allowed DeSousa to “Just keep at it, I mean, hey, if they hit it, good for them, they did their job, but come back and try to hit me again,” the senior said with a grin.

In evidence that baseball is a very reciprocal sport, the way DeSousa was dealing helped the Spartans lineup relax and focus on their job at the plate. As three-hole hitter C.J. Balliet explained, “It makes us feel real relaxed at the plate, takes a little stress off our shoulders. When our pitchers are on it’s awesome and really helps.”

DeSousa struck out the side in the second and third innings while Berthoud continued to add to their lead. Singles from Workman and Wyatt Stratmeyer sandwiched, and a Thomas Jefferson error and a walk earned by Oliver while Yuska reached on a fielder’s choice, when all was said and done Workman, Fowler and Yuska all crossed home plate to give Berthoud a comfortable 5-0 lead.

Thomas Jefferson did their best in the bottom of the fourth to stay in the game. Some patient at-bats earned a couple of walks, and a Berthoud fielding error allowed three runs to come home, giving Jefferson some life. DeSousa got out of the inning without allowing any more damage, striking out two batters and inducing a soft fly ball out to right field.

DeSousa scored one more insurance run for the Spartans in the fifth frame but hit his pitch count limit at the end of the sixth inning. Oliver took the mound in relief for Berthoud and worked a perfect one-two-three seventh inning to earn the save in what was Berthoud’s first post season win since 1999.

Berthoud only had about 30 minutes to enjoy the win before taking the field against host team Valor Christian. The Eagles showed why they are the No. 2-ranked team in Class 4A, tallying seven hits and working three walks to score eight runs in the first two innings. Berthoud refused to go quietly, however, as they have all proved their resiliency.

Through the next five innings, the last five innings of high school baseball for Berthoud’s 14 seniors, The Spartans out-scored Valor 4-3. DeSousa and Balliet each tallied three hits in the game, with DeSousa driving in two. Pitching in relief of Oliver, senior do-everything player Colin DeVore allowed Valor only five hits in four innings, but the Eagles managed to push three across the plate, keeping Berthoud at bay and advancing to the next round of the playoffs.

Balliet admitted the loss was disappointing, but Berthoud gave the Eagles everything they had. “We came in thinking, we’ve got nothing to lose, we’ve got everything to gain, and if we go down, we’re gonna go down swinging,” the first baseman said.

After the game, Kouns praised his team’s never-say-die attitude, saying, “At 8-0 this looked like a classic; roll-over, phone the rest of the game in, and my guys kept grinding, they kept grinding and I’m disappointed the season came to an end, but I am not at all disappointed in this group of kids. Everybody here contributed in some way, somewhere along the line this season.”

While the season ultimately ended sooner than they had hoped, Balliet explained the Spartans are proud of what they accomplished in 2018. “This is a great bunch of guys we have here and we’ve been working hard all four years to get to this point, glad we could do it this year. We’ll remember this for the rest of our lives.”