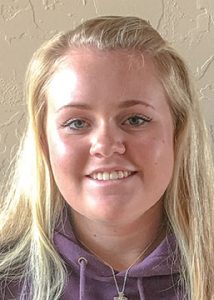 Even before they hit their opening tee shots, the Berthoud High School girls golf team found themselves in familiar territory. The May 9 regional tournament was held at Saddleback Golf Course in Firestone, a venue at which the Lady Spartans had already competed twice in the 2016 season.

As a team the Lady Spartans finished a respectable sixth place in the 18-team field with a 292 team score. Berthoud’s varsity foursome – Molli Boruff (82), Kyra McDonald (99), Shannyn McEntee (111) and Alex Ryan (119) – took a combined 61 fewer strokes to get around the links on May 9 than they did in the season’s opening tourney at Saddleback on March 14.

Boruff’s 10-over-par 82 was good enough for a second-place finish that will send the junior standout back to the state tournament – where she finished in a middle-of-the-field tie for 44th place last season – while McDonald’s 99 was just three strokes shy of the state-qualifying score for the Northern region.

Boruff explained she had some nerves before teeing off at regionals, but parring the first hole and being at even-par through the first six, “really helped me just play my game.”

The excitement in Boruff’s voice was evident as she talked about making a return to Colorado’s ultimate high school golf competition. “I’m really excited for state this year; I feel it’s going to be pretty different than last year,” Boruff said.

“Molli’s dedication to working hard and getting better each year makes her a special golfer, along with her absolute love of the game,” said Berthoud Head Coach Mary Durkin, who will accompany Boruff to the state venue, Pueblo Country Club, to play a practice round before the two-day, 36-hole tournament that takes place May 23 and 24.

Twice a tournament champion this season, Boruff explained that having been to state last year, coupled with the two weeks of practice time she will have to prepare gives her a boost of confidence. “I just feel like being there last year and feeling how it was and how everything worked, it’s different from a regular tournament; that helps,” she said. “The two weeks [before state] is going to be good to get dialed-in on my shots and everything.”

Durkin explained the success Boruff has enjoyed has served as a motivation for other golfers on the Berthoud squad. “Many of them have already seen how hard Molli has worked to get where she is, and a few girls have now decided to take lessons or join a program this summer,” Durkin said, and added that through her fundraising operation is now able to provide lessons and programs to help the girls improve their games in the offseason.

McDonald’s 99 at regionals was a very sizable improvement over the 120 she shot at Saddleback in the first tournament of the season.

“The biggest improvement has been Kyra moving from JV to varsity,” said Durkin. “Her scoring average has improved greatly since last year. Kyra got a new driver and has been working hard at making it work for her.”

McEntee, who Durkin mentioned has been taking private lessons to improve her game, shot a 111 at regionals, which represented a 15-stroke improvement over her first round of the season.