Berthoud’s Molli Boruff watches her tee shot on the par-3 10th hole at The Mad Russian Golf Course in Milliken on April 20. Boruff won the contest with a low round, 85.
John Gardner / The Surveyor

“I just kind of got tired of softball because I was the pitcher and it just got old,” she said. “I just wanted a change.”

Two years ago, Boruff picked up a golf club and set her sights on the pin. In the two years since, she’s become Berthoud High School’s top golfer; and only halfway through her sophomore year she’s already won two events.

As she approached the 17th hole at The Mad Russian Golf Course in Milliken on April 20, Boruff knew she was in contention for first place, so she just focused on the remaining two holes and played her game. Three other girls were on her heals only a few strokes behind, but it didn’t rattle Boruff.

“I was just focusing on one shot at a time; get on the greens and make the putts,” she said. “Play my game and don’t worry about them.”

That she did. She managed to walk away with a bogey on 17, and despite hitting out-of-bounds on 18, she saved a bogey on the last hole of the day as well to secure a solid 16-over-par, 85 for the round.

“I played as good as I hoped I would, but I missed a couple of putts that I could have made,” she said.

Boruff’s 85 was three strokes better than three other girls tied for second place; including Resurrection Christian’s Anna Marie Lee, Skyline’s Grace Gunlikson and Erie’s Jordan Couper, who all shot an 88.

“I don’t get extremely nervous,” Boruff said. “But I had to make sure I got a good score on the last hole so that I could stay in first.” 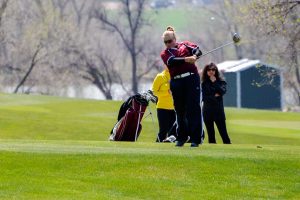 This is the second time Boruff has shot an 85 this season; both times she’s taken first place. Her first victory of the season came on April 13 at the Erie League Match at Ute Creek Golf Course in Longmont. It’s also the lowest score in competition that she’s been able to card in her young career. She said last year’s best round was a 93. She’s trying to break into the high 70s by season’s end. But according to Berthoud girl’s Head Coach Mary Durkin, the 85 is an extremely good score for one of the toughest courses the girls will play all season.

“She knew she was close at the end, so she just had to stay tight and true to her game and she was going to be fine,” Durkin said.

Boruff started out great, as she nearly drove the green on the 249-yard par-four, second hole. She would eventually birdie the hole, which left her one-under-par through the first three holes.

“I had a really nice drive next to the green,” she said. “If I’d have had my drive right, it would have been on the green.”

A bogey on the fourth put her back at even. However, she managed to finish the front nine at plus seven and was still in contention at that point.

“I was thinking about one shot at a time,” Boruff said. “When I do have bad strokes, I’m like, ‘that’s ok,’ and move on to the next one.”

On the back nine she had only two pars, and also added two double bogeys, but none of the field could catch her.

With the help from her teammates, the Spartans finished the tournament in second place behind Skyline. Berthoud’s Shannyn McEntee tied for ninth place, shooting 100, while Katie Rice shot a 101. Kyra McDonald shot a 104, and Mikeala Matzen carded a 105. The rounds for McEntee, Rice and McDonald are the best of the season for each, so far. And that speaks volumes about what the girls’ squad is capable of this year.

It may be difficult to believe because of Boruff’s success on the links this year that she’s only been playing golf for two years. She started just before her freshman year and played for the Berthoud squad last year, but she’s made steady progress in that short amount of time and Durkin expects big things from Boruff.

“She’s got a lot more time to improve,” Durkin said of the sophomore, “two more years to make some changes.”

Boruff still has her sights set on more birdies, and lower scores, but she’ll enjoy the win for now.

“I’ve been working on this all summer and taking lessons for two years,” Boruff said. “And it’s paying off.”