As they hit the stretch run of the regular season, the Berthoud High wrestling team is rounding into form. 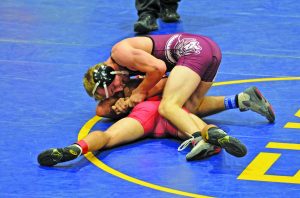 Photo By: Jill Strait – Berthoud’s Austyn Binkly takes position on his opponent at the Florence Invitational last weekend. Binkly, currently ranked No. 4 (3A) in the 138lb division, won first place in the tournament.

The Spartans took fifth-place with a team score of 135.5 in the 16-team Florence Invitational this past Saturday with five Berthoud wrestlers earning places on the podium. Dalton Williams (106lb), Kolten Strait (113), L.T. Torres (120), Austyn Binkly (138) and C.J. Balliet (285) all took home medals from the tournament. Two days before heading down to Florence, the Spartans hosted Frederick in a league dual which Berthoud won convincingly, 55-21, with 10 Spartan grapplers winning their bouts.

Binkly, a sophomore, won first place in Florence in dominating fashion as he defeated Clay Yarnell of Olathe with a 9-0 shutout victory in the title bout. Binkly had pinned Frederick’s Jonah Sanders in 3:01 two days prior in the league dual. Ranked No. 4 in class 3A’s 138lb division, Binkly was one of three Spartans to wrestle for the gold medal in Florence.

Kolten Strait, wrestling in 113s, fell by a 10-6 decision to Isiah Gamez of La Junta to take second place in the tourney while senior C.J. Balliet lost in the heavyweight title bout via a fall in 1:59 to join Strait with a silver medal. Balliet had pinned Frederick’s Jonathan Watts in just 28 seconds in last Thursday’s Frederick dual while Strait won a 10-0 major decision over Cruz Jimenez in the same event.

Sophomore L.T. Torres, who won convincingly with a technical fall (18-3, 5:32) over Frederick’s J.T. Gardner, won the fifth place bout in Florence with a razor-thin 4-3 decision over William Erzen of Elizabeth.

Berthoud gave two forfeits, one in the 106lb class and another in 160s against Frederick, but won 10 of the remaining 12 matches in the dual. In addition to the pins from Binkly and Balliet, five more Spartans won via the fall in their bouts with the Warriors. Talyn Massie pinned Cody Ayers with 10 seconds left in the first period in 126s, Kyle Conlon pinned Garrett Phillips in 1:27 in the 145lb division, Anthony Trojahn won via the fall in 1:13 over Justis Ornelsa in 182s and Peter Bullet defeated Chris Espindola in 1:28 in 220s. In the 195lb class, Berthoud’s Brock Johnson, wrestling for the first time since recovering from a serious knee injury, took care of business by pinning Tyler Segura in just 52 seconds. While it was not a pin, Wyatt Larson won an equally-impressive 13-0 major decision over Robert Saldi in 170s.

Berthoud will host the annual Soeby Spartan Classic, one of the biggest and most important tournaments of the regular season, this Saturday at BHS. Matches are scheduled to begin at 8:30am and will continue through late afternoon.