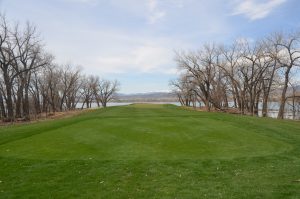 Photo by Amber McIver-Traywick – The par-three eighth hole extends out on a peninsula in to Lonetree Reservoir.

The new TPC Colorado golf course at Heron Lakes lives up to its billing. Offering a challenging track befitting of the course’s professional-level status, TPC Colorado is as equally picturesque.

The course’s 18 holes are spread out over a large acreage, hugging the shores of Lonetree and Welch reservoirs and offering exquisite views of the Rocky Mountains. For those in good shape, the course is walkable, but a golf cart is preferable given the large distance and hilly nature of the course. 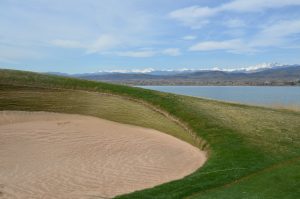 Be careful not to let the ambiance of the course’s location distract you; players will need to bring their “A game” when playing TPC Colorado. The fairways are wide but very undulating; on the par fours and par fives, players will regularly be tasked with hitting their second and third shots with the ball either above or below their feet.

The greens are guarded, in many cases on all sides, by numerous deep, stacked-sod pot bunkers reminiscent of the courses on the other side of the Atlantic. There is only one hole on the course where trees come into play – the par-three eighth, which extends on a peninsula out into Lonetree Reservoir. This par three, along with the other three on the course, places an emphasis on accuracy. When playing eight, players need hit their tee shot as straight as possible, as coming into contact with the trees that line the hole left and right will result in the ball dropping into the water and incurring the dreaded penalty stroke.

One of TPC Colorado’s signature holes, the par-three 16th, has players teeing off from an elevated tee box, looking dead straight at Longs Peak and Mount Meeker in the distance. The green is long and narrow, with bunkers in front and to the sides and a steep hill backed by water on the backside. Players will need to hit down on the ball off the tee to create enough back-spin so as to stick the ball on the narrow green. With its long and narrow green, the hole bears some similarities to the famous par-three 12th at Augusta National, with water and views of Longs Peak on the backside at TPC Colorado in place of the azalea’s and Georgia pines at Augusta. When the construction of TPC Colorado’s clubhouse is complete players will face the added pressure of having those enjoying food and drinks on the patio watching their high-risk tee shots.

Even though most of the fairways are wide and absent of trees, many holes do place an emphasis on accuracy off the tee. The par-four 12th, which does not look too difficult on paper (355 yards from the long tee box), has five deep bunkers speckled throughout the various landing zones on the fairway. Players can opt to go short and avoid the bunkers entirely, but providing a difficult approach shot to small, elevated green. Aiming right off the tee will require a pinpoint shot that lands between the bunkers on front, back and left of the landing area and native area on the right. Going longer and to the left, there is a somewhat larger landing zone but with bunkers on three sides.

The longest hole on the course, the par-five 13th, which measures in at an astounding 792 yards from the tournament tees (665 from the long), dog legs left, bringing in a series of deep bunkers stacked into the hill on left side of the fairway. Here players will want to be in the fairway off the tee and then take a fairway wood, hybrid, or long iron on their second shot, staying right to avoid the large bunkers and set themselves up for a long approach shot to the green, with bunkers of its own on the left and right.

Even though the length of the course can be varied to each golfer’s skillset, playing way back, up front, or somewhere in the middle, the greens on all 18 holes are tough. Most feature multiple tiers and steep breaks. Come summer, when the greens are dry and cut short, gauging and controlling the speed on putts will be a challenge for all golfers, regardless of ability.

One aspect of TPC Colorado that is unique is each hole is distinct, all 18 offer their own unique challenge (or series of challenges) for players. With a unique design, a multitude of challenges, and a character all its own, TPC Colorado will be offering golfers an enjoyable experience for generations to come. 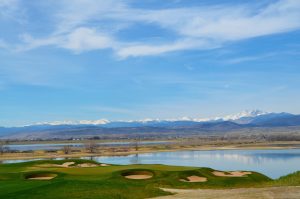 Photo by Amber McIver-Traywick – The view from the pro shop and clubhouse currently under construction and looking out on the front range and Lonetree Reservoir.