Possessing strong team chemistry is an incredibly important aspect of success in sports. After they swept the competition to take first place in the annual Spartan Classic, even Nobel Laureate Marie Curie would be impressed with the chemistry displayed by Berthoud High School (BHS) girls basketball team. 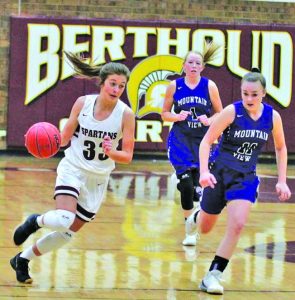 Photo by Tiffany Rafferty – Berthoud’s Maddie Barcewski races away from a pair of Mountain View defenders last weekend at the annual Spartan Classic. Berthoud won all three games in convincing fashion to start the season 3-0.

Berthoud defeated Mountain View 69-43 on Thursday evening, dispatched Bear Creek by a 52-35 final on Friday night, and completed the sweep with a 65-26 drubbing of Adams City on Saturday afternoon. The team looked to be in mid-season form, running like a well-oiled machine as they got contributions from up and down the roster.

What is perhaps most remarkable about the Lady Spartans strong chemistry is a sizable portion of the team has limited, if any, prior varsity experience.

“This group has been really solid as a unit, and the camaraderie has been excellent ever since we started practice,” Berthoud Head Coach Alan Gibson explained at tournament’s end. “We’ve done a lot of things with roles; one, they’ve got to know their role; two, they have to understand their role; three, they have to accept it; and four, they have to embrace it, and I think for the most part all of our girls have advanced to the fourth level of that.”

Regardless of which five players were on the floor at any given moment, Berthoud had scorers, facilitators, some who shined on the defensive end and a few who did all of that and then some. “I love how close our team is this year. We work really hard and work really well together, a lot more than last year. I just feel like this is a stronger team than it’s ever been,” said senior Eriana Rennaker, whose four first-half three-pointers in the Bear Creek game extended Berthoud’s lead first from 6-3 to 12-3 and later from 30-18 to 36-18.

Gibson and several players remarked the team’s chemistry has been developed in practice. As the coach explained, “They push each other during the practice sessions, and when you get great competition in practice it makes it a lot better and a lot easier to react to the intensity of the game and the pace of the game when you have teammates that are pushing you that hard.”

Junior Maddie Barcewski, who poured in 20 points, grabbed 13 rebounds and swiped a team-high 14 steals in the three-game set, agreed saying, “I think it’s all in practice. We work our butts off in practice and it pays off in games. We gel with each other really well; we have such an amazing group of girls that it just clicks.”

Berthoud got off the strong starts in all three games. Led by sophomore guard Bre Fowler, who scored 39 of her team-high 50 points in the first halves of the trio of games, the Lady Spartans more than doubled-up the other teams in the opening halves by a combined 119-53. Berthoud scored only 28 points in the second halves of the first two games but rectified their slower-than-desired finishes in the series finale, out-scoring Adams City 28-13 in the final 16 minutes on Saturday afternoon.

Gibson chalked up the cooler second halves to a drop in intensity and also admitted, given the large leads his team built to begin each game, the team let off the throttle a bit after halftime. “When you’re up like that you don’t play your pressure defense, for a variety of reasons, and I think when you don’t play as hard defensively you back off offensively as well,” Gibson said.

Berthoud employed their full-court press in the early throes of each game and saw a fair amount of success, forcing 14 combined turnovers in the first quarters of the three games. Against Adams City, Berthoud employed the man defense, after primarily using a zone look in the prior two contests, and did not allow the Lady Eagles to make a single shot from the floor. “Our defense, our trapping was really great. They were getting frustrated, we were getting under their skin and forced a lot of turnovers. Our teamwork was amazing,” Fowler said.

Gibson explained the team came in to the tournament wanting to test out and work on a number of aspects of their game, particularly on the defensive end of the floor, and that was the reasoning behind employing both man and zone looks in the three games. “We’re going to have to be able to do everything,” Gibson said. “Against the very top-level teams you have to be able to do both, because if you can’t they’re going to find your weakness, so we’re going to try not to have one.”

It’s hard to see how the Lady Spartans could have started the season any better, but as Barcewski explained, “It feels good, it sets a good foundation, but we’re not satisfied. We want to do a lot more.”

Berthoud (3-0) will play in another three-game tournament this weekend in Longmont. The Lady Spartans will face off with Thomas Jefferson on Dec. 13, Longmont on the 14th, and close out the weekend in a matchup with Glenwood Springs on Dec. 15.