Track dusts off the rust in Thornton

At Saturday’s season opening Thornton Early Bird meet, Berthoud High School’s track team looks to be right where expected for the beginning of the season, when comparing marks with those from other schools and meets around the state. A number of athletes were missing due to the spring break, but there were other schools that were shorthanded as well. Berthoud’s boys finished in third place and the girls placed fifth. 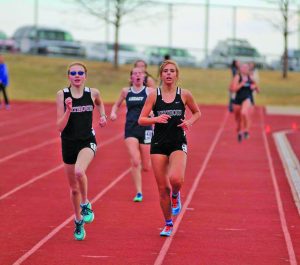 “For most of the meet Berthoud combined (male and female) was in first place,” commented Coach Colby Schultz. “At the end of the meet we didn’t have any 3200 runners and scratched the mile relay teams to prevent injuries, but the kids stepped up and did what they had to do. It was a good first meet.”

Caleb Kelly won the shot put and Zak Starkey placed sixth in the discus. In the girls shot put Celsey Selland was fourth, Casady Berry was sixth and Kailey Berry was eighth. Kailey Berry and Selland tied for seventh place in the discus. This group scored close to as many points in the first meet as the throwers did all last season. One year of maturity and hard work during the off season has definitely paid benefits.

“We got the rust off the wheels,” said Coach Schultz. “It’s a good start.”

The Spartans will compete in Windsor this Saturday, March 17.