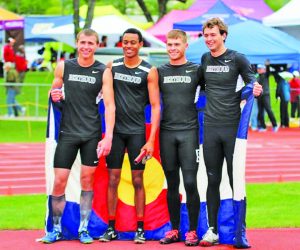 Qualifying to the state track meet is one feat to accomplish. Placing is an all-together different beast.

The meet consists of three days of competition, including preliminaries and finals in many events. One has to be at the top of their game every race, because the entire field of competitors is separated by mere tenths or hundredths of seconds or inches. To come away with a medal is exceptional; to win the gold is phenomenal.

Huge congratulations to the boys of Berthoud in the 4×100 meter relay who accomplished that task. On the second day of competition, Trinity Buckley led off the sprint relay, making up the stagger on three teams. A clean handoff to Connor Siruta enabled the Spartans to catch two more teams. Coming around the final turn in second, Ryan Schmad gained ground on the rest of the field. Schmad has been handing off the relay baton to Jake Rafferty since middle school, and the practice between these two enabled Rafferty to gain two strides on the other teams. Rafferty raced down the final 100, increasing his lead to almost 10 meters ahead of the other teams to win a gold medal. The boys had set a new school record of 43.04 in the event in the prelims on Thursday.

The first field event medal of the state meet was a silver won by Cailey Archer in the high jump. Archer thought she had a shot at winning the event when Jordan Lanning of Bayfield missed two attempts at 5’3”, which Archer had made on her first try. However, Lanning made her final attempt and went on to clear 5’7.75” and set a new meet record. Archer didn’t have long to celebrate the high jump though. Archer was standing upon the medal stand for the high jump when her 4×800 relay team came out of the staging area. Archer ran the first leg, running a very tightly-packed half-mile race with elbows bumping and some pushing and shoving for position. She handed the baton to Daria Degnan who gained one position. Emily Cavey continued to push the pace for the Spartans. Senior Maycee White was passed by one team but she held on for ninth place in 10:02, earning the first state medal in running events for the girls. All four of the girls ran personal-best split times. Two hours later White competed in the 3200 meter run placing 12th with a time of 12:15. 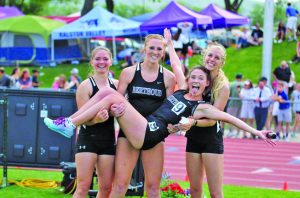 Photo by Tiffany Rafferty – Celebrating senior Maycee White’s (front) last relay at the state track championships is, left to right, Daria Degnan, Emily Cavey and Cailey Archer. The girls placed ninth just a few seconds off of the BHS record for the event.

Ryan Schmad definitely had the most taxing state meet of the boys. Schmad ran all of his races twice in the three days, due to the preliminary/finals schedule. Schmad was on the championship 4×100 relay team, placed third with the 4×200 relay team, eighth in the 200, and fifth in the 400. In the past two weeks Schmad has added his name to the Berthoud High School (BHS) track school record board in the 4×100 relay, 4×200 relay and 400-meter dash.

Brock Voth has been struggling some in the triple jump this season. The senior had only jumped over 42 feet once this year, nowhere near his 43’3.5” school record set last year. However, Voth saved his best for this moment, where in his first jump of finals, he jumped 43’6.5” which would eventually be his furthest jump and seventh place.

Day two of the meet started early, with Cavey and Kailey Berry in the discus. Berry, who has improved over 30 feet in the event since last year, was sitting in second place at 116’1” early in the competition. Cavey, like many others, was struggling with fouls and shorter than normal throws. On her last throw of finals, the sophomore tossed the disc 119’1” to place second. Berry, who came into the meet ranked 11th, took the bronze medal. Cavey’s silver-medal throw set a new BHS record.

Archer had another day of work racing in the 800, placing 12th. She had to come back in the evening to race in the preliminaries of the 4×400 relay with Degnan, Cavey and Sophia Visger running 4:08.7; significantly faster than any Berthoud team has run this season. The girls qualified for finals on Saturday where they finished in seventh place.

Buckley, Voth, Rafferty and Schmad placed third in the 4×200 relay, running 1:29.52 and improved upon last week’s school record time. Jordan Keck set a personal record of 9’3” for eighth in the pole vault and Emma Briles was ninth at 8’9”.

On the final day of competition, Samantha Mulder added two seventh-place finishes in the 100 hurdles and 300 hurdles to her resume. Siruta placed ninth in the high jump. It was not his best jump, but the previous two days of running took some of the spring from his legs.

Both boys and girls teams finished in eighth place. The girls had 35 points and the boys had 29 points. The Classical Academy won the girls team championships. Bayfield’s boys completed a feat that has only been accomplished a few times ever in Colorado. They won football, basketball and track state titles this school year. Limon did this in 1960-61 and 1961-62, but it is believed no other school has accomplished the Triple Crown recently.