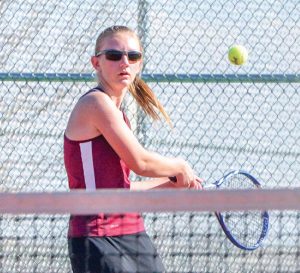 Berthoud’s Bridget Hyde prepares to return a shot against Skyline’s Andrea Rauschmayer during a match at
Berthoud High School on March 30. Hyde won the contest in straight sets, 6-2, 6-1 and helped her team win
its third team victory of the season. The Spartans are at 3-3 on the season.
John Gardner / The Surveyor

Berthoud’s Emily Marty found herself down 4-3 early in the second set against Skyline’s NoNo Ncube on March 30 as the two teams faced off at Berthoud High School. But Marty didn’t let the situation get out of control, she focused and persevered, ultimately winning the set and taking the match in straight sets, 6-3, 6-4.

It was a good victory for Berthoud’s No. 1 singles who played a staunch opponent with a great return.

“She returned a lot of my shots,” Marty said. “[Ncube] served really well, too. It was kind of tough for me to get all of my balls in today, but it turned out OK.”

Marty and company celebrated a great victory at home, 6-1 over visiting Skyline, after a tough week of matches against Eaton, which resulted in a 7-0 Berthoud defeat, and a sluggish showing at the Centarus Tournament over the weekend that resulted in three fourth-place and three sixth-place finishes out of eight teams, according to Berthoud tennis coach Leigh Vitasek.

Vitasek said that her team played well at home but stressed that the young Spartans’ squad is improving each time they get on the courts.

“Every match they play, they get better,” Vitasek said. “Today was a good day; they put a lot of stuff into play that we’ve been practicing.”

Marty explained that early in her game against Ncube, that she was struggling with her serve but she just worked through it and managed to take a win. Ncube was like a backboard, returning nearly everything Marty sent her way. 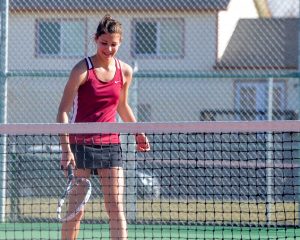 No. 1 singles Emily Marty smiles after winning a point during her match against Skyline’s NoNo Ncube on March 30 at Berthoud High School.
John Gardner / The Surveyor

“I was thinking I needed to move her around a little more to get her running, so it’s not as easy to get the shots back,” Marty said. “It worked for the most part.”

The Spartans’ No. 2 and No. 3 singles, junior Joanna Pyle and senior Bridget Hyde, had a great day in the sun as they both won their matches in straight sets. Pyle defeated Skyline’s Brenna White 6-1, 6-0 in the day’s first victory, and credited her strong serve as a key to the win.

“When I’m winning I get more confident in my serve,” Pyle said. “I’m really consistent and my serve is one of the stronger parts of my game.”

Berthoud’s Bridget Hyde stepped up a week earlier to the No. 3 singles slot and came out with a victory.

“It’s definitely a challenge,” Hyde said of moving into the single’s spot. “But I think, so far, I’ve been able to compete pretty well.”

This was her first time facing Skyline’s Andrea Rauschmayer, but Hyde made quick work of her opponent winning in straight sets, 6-2, 6-1.

“I hoped to do this well, but you can’t be sure of anything,” Hyde said. “I toughed it out and was abel to get the win.”

The Spartans’ singles were in great shape and coach Vitasek was pleased with their performance.

“They were awesome today,” she said. “They were on the top of their game today.”

Skyline’s No. 4 doubles team of Savanah Davis and Kyra Schroeder delivered the only defeat of the day to Berthoud as they downed Emily Casper and Lilly Homeier, 1-6, 6-1, 6-4. And Berthoud’s doubles Jessie Sykes and Skye Kearney won by default.

The tennis team resumes its season after spring break (April 6-10) when they visit Frederick on April 13.