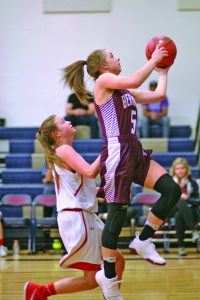 Even with a new head coach and some fresh faces on the varsity roster, the Berthoud High School (BHS) girls basketball team opened the 2017-18 season just as they did last year, with a clean sweep at the Manual Tournament in Denver.

Berthoud bested host-team Manual by a 64-24 final last Thursday, then topped Ponderosa 63-26 and wrapped up their weekend with a 65-38 drubbing of Liberty Common on Saturday afternoon. For a Berthoud team that has goals of making a deep run in the state tournament this season, the first three games could not have gone any better.

Berthoud tipped-off their season with the win over Manual. A 30-point effort from sophomore star Emily Cavey, who shot 61-percent from the floor, and also pulled down nine rebounds, was huge for Berthoud. The Lady Spartans raced out to a 25-6 lead after the opening quarter and extended it to 43-15 by halftime. Berthoud let off the gas in the second half, scoring 21 points to Manual’s nine. Mckayla Milan contributed eight points for Berthoud and Sydney Meis added another seven. Eriana Rennaker grabbed nine boards and freshman Breanna Fowler swiped an astounding eight steals.

The next night Berthoud faced off with Ponderosa and were equally dominant as the game before. Three Lady Spartans hit double figures in scoring, with Cavey hanging 21 on the board, to go with a team-high 11 rebounds, Meis adding 15 more that included three buckets from downtown, while Logan Davidson chipped in another 11. Like the night before, Berthoud jumped ahead early and never looked back. Berthoud led 23-2 after the opening period and 40-15 by halftime.

The final game of the weekend saw Berthoud taking on Liberty Common, who provided the Lady Spartans a slightly tougher test than the two prior games. Berthoud shot only 35 percent from the floor, but four threes from Sydney Meis, who paced Berthoud in both points (20) and rebounds (seven), helped keep Berthoud comfortably ahead from the opening tip to the final horn. Fowler and Ashlee Burdette, who saw her first action of the season against Liberty Common, each grabbed six boards for Berthoud, Cavey contributed 13 points, and Fowler dished out a game-high six assists.

Berthoud figures to face a somewhat stiffer test this week when they co-host the annual Spartan Classic with the BHS boys team with three games spread from Dec. 6 to 9. The Lady Spartans took on Mountain View on Wednesday and will face Pueblo East on Friday and close out the tourney Saturday afternoon against Summit.