In basketball, the free-throw line is often referred to as the “charity stripe,” as players get to take their shots uncontested from an opposing defense.

Hosting Pueblo Central in the opening round of the state playoffs on Tuesday night, the Berthoud High School (BHS) girls basketball team shot an outstanding 31 for 36 from the free-throw line as they cruised to a 80-59 victory to advance to the second round of the 4A bracket. 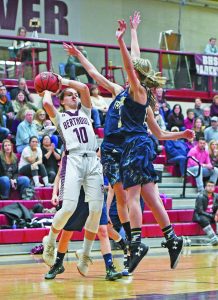 Photo By Lance Elmore, Blink Photography – Berthoud’s Sydney Meis looks to pass around a double team in a game earlier this year. Meis made a pair of three-pointers and scored 16 points in Berthoud’s opening-round playoff win over Pueblo Central on Tuesday evening.

His team’s stellar effort from the line came as no surprise to Berthoud’s head coach, Alan Gibson, who explained after the game, “We shoot a lot of free throws (in practice). We always try to make the point that ‘it could be you on the line with the game on the line.’ We’ve shot probably 20,000 free throws as a team since the season started, and we shoot at like a 72 or 73 percent clip in practice, so our 31 for 36 tonight is pretty typical of what our girls do.”

The two teams were just about even from the floor, with Berthoud making good on 24 field goals to Central’s 23, but it was Berthoud’s 21-point advantage from the foul line that made the difference in the game. Junior Logan Davidson, who paced the Lady Spartans with 25 points and made good on 11 of her 14 free-throw attempts, said, “It doesn’t really surprise me, in practice a lot of what we do is free-throws, because free-throws win games.”

Early on, Berthoud discovered they were able to attack the basket against Central’s defense and Davidson, in particular, found a great deal of success. The junior made good on five buckets from right under the hoop and drew six fouls in the first half alone.

“I think after I realized they weren’t putting too much pressure on me down low because I’m not one of the biggest girls, they can’t see how strong I am or my effort … I just kept taking it in and made my free throws,” Davidson said.

Central’s offense woke up from their first-quarter stupor, where they scored only four points and missed 10 consecutive shots, to score 21 in the second period. Yet Berthoud kept pace with a perfect 12-for-12 effort from the foul line as Davidson, Emily Cavey, Sydney Meis, Ashlee Burdette and Celsey Selland could not miss. The Lady Spartans continued to attack inside and down low, drew fouls, and got themselves into the bonus by the midway point of the second quarter.

“We were just attacking the basket and not really wasting much time,” Gibson said. “We were really making a conscious effort to get the ball inside, and when you do that you have a lot better chance to get to the line. The good thing about going to the line is tonight we really converted there.”

Berthoud adjusted their defense at the break, opting to play primarily a half-court zone, which paid dividends on both ends of the floor. The Lady Spartans began to win the rebound battle and their transition offense kicked into high-gear.

Davidson, Cavey, Burdette and Meis all scored from the floor in the third period and, early in the fourth, Meis went coast-to-coast against a Central full-court press with the resulting lay-up putting the Lady Spartans up 20, 65-45.

“We were able to do most of our things in half-court … and, once we started getting the rebounds, we were able to get the ball out and get some transition baskets,” Gibson said. Cavey scored six in the fourth quarter to finish the night with a double-double, 17 points and 11 rebounds while Meis added another 16 points.

Berthoud, the No. 17 seed in the state bracket, will travel to No. 16 Greeley Central for the second round of the state playoffs on Friday night. Tipoff is set for 6:30 p.m.