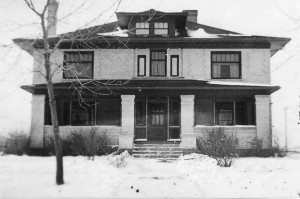 In the winter of 1920 teh home of Dr. and Mrs. D.W. McCarty at 645 Seventh St. was cloaked with snow. The McCartys built the home at the western outskirts of Berthoud in 1916.
Photo from the Fickel Collection, Berthoud Historical Society

Saturday, June 21, will be a day when Berthoud celebrates history. That afternoon the Berthoud Historical Society’s house museum, the McCarty-Fickel Home at 645 Seventh St., will be open for guided tours. A vintage car show that promises to attract many local participants will be held adjacent to the house in the 700 block of Turner Avenue. That day Fickel Park will also be the scene of the Berthoud Outdoor Quilt Show. This year the quilt show will be accompanied by a craft fair. It is hoped that the craft fair will evolve into an independent event in the near future.

The day’s festivities begin at 10 a.m. when Fickel Park is opened to the public for the Berthoud Outdoor Quilt Show. A spectacular display of hundreds of colorful quilts hung from ropes suspended from the park’s trees, the quilt show also features booths and drawings that attract visitors from throughout the region. A vintage car show that is open to anyone who wishes to show off their classic vehicle runs from 10 a.m. to 1 p.m. in the 700 block of Turner Avenue. The outdoor quilt show concludes at 4 p.m.

Tours of the McCarty-Fickel Home begin at noon and end at 3 p.m. The McCarty-Fickel Home at 645 Seventh St. was built in 1916 by Dr. and Mrs. D.W. McCarty. Built in the architectural style of a “Denver Square,” the house is notable for its spectacular central staircase and large rooms in the four corners of the first and second floors. Constructed on the outskirts of Berthoud during WWI, the house was built at a cost of $10,000. The dwelling is located on five city lots amid shady trees and lush garden beds that are maintained by historical society volunteers.

Guided tours of the house will be offered at a suggested donation of $5. Ticket brochures that include a self-guided, one-block walking tour to the house from the northwest corner of Fickel Park, will be available on tour day at the Little Thompson Valley Pioneer Museum at 224 Mountain Ave., the McCarty-Fickel Home at 645 7th St., and the “home tour” ticket tent located in the southeast corner of Fickel Park.

An added feature of this year’s event will be an exhibition of paintings by local artist Michael Georges. The proprietor of the Picture This frame shop, at the corner of Fourth Street and Mountain Avenue, Georges has been selected to compose a painting that will be auctioned at the Berthoud Historical Society’s Pioneer Heritage Gala on Sept. 20. The subject of Georges’ painting is the delivery of the first Fordson tractor to Berthoud and Northern Colorado in 1918. The backdrop of the painting is Berthoud’s historic Colorado & Southern depot at the intersection of Third Street and Massachusetts Avenue. The painting will be unveiled at 11 a.m. and remain displayed on the grounds of the McCarty-Fickel Home until 3 p.m.