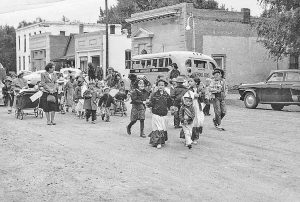 In 1929 the Town of Berthoud purchased the former First National Bank of Berthoud building at 328 Massachusetts Ave., for use as a town hall. When this photo was taken in the late 1950s or early 1960s, the present-day addition on the east side of the bank building had not been constructed.
Photo courtesy of Jane Waggener Vielehr

By Mark French
The Surveyor

Berthoud is getting a new town hall. At the end of December, the offices and meeting room of the Town of Berthoud will be moved from their present location at 328 Massachusetts Ave., to new quarters at 807 Mountain Ave. The move will mark the second time the Town of Berthoud has moved its town hall since the burg was incorporated in 1888.

Prior to 1929 the building that served as Berthoud’s town hall doubled as the Berthoud Hose Company’s hose house. Construction of the building got underway in 1890 after 41 Berthoud taxpayers signed a petition to appropriate $250 for the building of a hose house where the local volunteer fire department could dry fire hose and store a hose cart.

In June 1890 Berthoud’s trustees ordered a building committee to procure plans for the hose house and specified the structure should be equipped with an observation tower and a steel cell that could serve as the city’s “calaboose.” In the spring of 1891 the hose house, which was located along the east side of the 500 block of Fourth Street, was completed at a cost of $324.20.

When the hose house needed carpet and improvements in January of 1895, town officials agreed to split the cost of $41.40 with the volunteer fire department, but also specified the hose company and town board would have exclusive use of the building thereafter. Town board meetings were held in an upstairs room, and town equipment, such as a horse-drawn road grader, was stored on the lots where the building was located.

“The board of directors of the First National, finding that the stock in the bank was not making satisfactory returns, decided to liquidate, and offered their deposits and a part of their paper securities to the Berthoud National as a quicker and better way of closing up the bank’s affairs…The Berthoud National, in its statement of December 31, 1928, had deposits of $600,278.86. The deposits taken over from the First National amounting to $105,462.82 brings the total to over $700,000.00.”

At a special meeting in May 1929 the Berthoud Town Board voted to purchase the First National Bank building at 328 Massachusetts Ave., at a cost of $2,500. The old hose house, but not the lots on which it sat, was sold as scrap lumber.

Later in the month the local newspaper noted, “The town has let a contract to John A. Bell for making the necessary alterations in the old First National Bank building to fit it for a town hall. When the building is ready for occupancy, the fire truck will be housed in a room 14×27 feet, in the southeast corner of the building. This room will have concrete floor, drying rack for hose, heat from the basement furnace, and cut off from the rest of the building by full built walls.

“The big plate glass window now in the south will be put in the west wall of the building. In the north end of the building will be a 6×6 steel cell—this in the northeast corner. And west of it will be an office for the police magistrate. The rest of the floor space will be used for a clerk’s office and council room, with a small lobby in the front of the building. The water station for haulers will be in the alley west of the hall…When the improvements are completed, Berthoud will have a town hall the equal of any town of its size in the country.”

The Town of Berthoud has occupied its present-day town hall from the summer of 1929 until the end of this month when it relocates to the building at 807 Mountain Ave., that was purchased from Guaranty Bank.

The photograph that accompanies this article — furnished to the Berthoud Historical Society by Jane Waggener Vielehr — shows Berthoud’s town hall as the background for a pet-and-doll parade that was held in the late 1950s or early 1960s. The addition to the east side of the former bank building had not yet been constructed when the photo was taken.

According to the late Dr. R.B. “Doc” Fickel, the addition to town hall was built in 1963 or 1964 when he was serving as mayor of Berthoud. The project was completed by volunteers that included his son, Bruce Jr., who was an aspiring Eagle Scout at the time.