By Mark French
Tales of the Little Thompson
The Surveyor 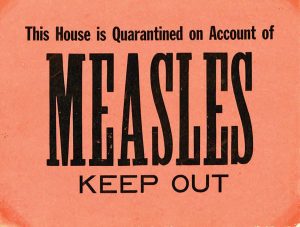 A century ago, in 1915, Berthoud closed its school for the week following Halloween. That year Berthoud had one school building that was located at the center of the city block occupied by present-day Fickel Park. The two-story, red-brick building was known as the “Berthoud School” because it housed students in grades one through 12.

In 1915 America took the threat of communicable diseases very seriously. Berthoud’s Dr. David W. McCarty, for instance, kept in his stock of supplies several brightly-colored cardboard quarantine signs that forbade anyone from entering a house where there was measles, whooping cough, chickenpox or diphtheria present.

In the early weeks of November 1915 the Berthoud School was closed because of a case of scarlet fever. An infectious disease that occurs most commonly in children, scarlet fever was one of the leading causes of death in children before the availability of antibiotics. Symptoms include sore throat, fever and a characteristic red rash.

During the week following Halloween 1915, scarlet fever visited in Berthoud. On Nov. 5, 1915, the Berthoud Bulletin announced: “A case of scarlet fever in an advanced stage was found in the schools on Tuesday morning, and after consulting with the other physicians of the town and with the school board, the health officer decided that it was best to close the school for at least a week. The building will be thoroughly cleaned and fumigated, and if no more cases develop in the community the schools will probably be opened next week, but if there is reason to fear that the contagion has spread, they will not be opened until it is thought to be entirely safe. It is hoped that the prompt action of Superintendent Sellers in reporting a suspicious case, and of the health officer in the closing of the schools, will result in the suppression of the disease, and is to be highly commended.

“Parents are urged to prevent as far as possible the congregating of children, and to watch them very carefully and report to their physicians any symptoms of the disease that may appear. Any carelessness in these matters is nothing short of criminal, as it might result in the death of your own or your neighbor’s child. There are known to be two other cases in town, though but one was found in the schools.”

Thanks to quick action, an epidemic was averted and the Berthoud School was soon reopened.

A year earlier, in 1914, contagious disease and quarantine were the basis of a Halloween prank that few found funny. Following the holiday the Berthoud Bulletin noted, “Berthoud householders did not fare badly at the hands of evil spirits Saturday night, only a few outhouses being knocked over, a gate or more displaced, and a few other minor pranks being played. Some evil-minded genius tagged the C.C. Clark residence and the United Brethren church with chickenpox cards giving rise to the rumor that those places were in the grip of contagion. ..”