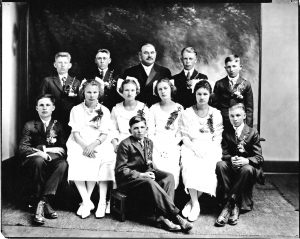 Rev. W.C. Woller (back center), pastor of the First Congregational Church in Berthoud, posed with a class of confirmands c. 1930.

The German Congregational Church at the southeast corner of Sixth Street and Lake Avenue in Berthoud has one of the community’s most unique histories. Constructed in the fall of 1908 by Germans whose descendants had been recruited to Russia’s Volga region by Catherine the Great, the church was first home to German-speaking immigrants. When these “German Russians” came to the United States in the early 1900s they were misidentified as Russians. These people had maintained their German culture while in Russia for two centuries and insisted on being known as Germans, not Russians.

While there were many German natives in the first wave of settlers in the Little Thompson Valley in the 1870s and 1880s, it was not until the early 1900s the German Russians came on the scene. Beginning in 1901 the Berthoud Bulletin announced “Russians” had been brought by train to northern Colorado by the Great Western Sugar Company to work as seasonal laborers in the beet fields. Several of these families made the Berthoud area their permanent home and within a decade owned farms.

On Dec. 1, 1908, the trustees of the Berthoud church purchased six lots for $900 and proceeded to construct a church building at the extreme northwest edge of Berthoud. In a matter of weeks the congregation erected a frame church building with a belfry and had it ready for the first service on the morning of Dec. 20, 1908.

Prior to the inaugural worship the Berthoud Bulletin announced, “Morning services at 10 a.m. in German conducted by Rev. Chas. F. Finger of Chicago. That all may be accommodated the United Brethren have generously granted the use of their church for the afternoon and evening services. Afternoon services will begin at 2:30 o’clock. The pupils of Berthoud High School will furnish hymns and songs in German. W.L. Cline will preach, the Rev. John Holzer of Fort Collins will speak for ten minutes in German. Evening services at 7:30 in German and English, conducted by Rev. Geo. Smith and Rev. T.J. Robinson. As the other churches have kindly given up their afternoon and evening services, a very large attendance is anticipated.”

Rather than build a parsonage, in 1909 the church trustees sold two of their six lots to John W. Everhard who had a house built at 718 Sixth Street. It was not until 1920 the church secured a parsonage for its pastoral family by purchasing Lum Saltzman’s house at 749 Fifth Street. The parsonage was conveniently located across the alley behind the church.

During the church’s early years, services were delivered in the German language, with men sitting on one side of the sanctuary and women on the other. Anti-German sentiments during World War I prompted many congregations to switch services to English and drop the word “German” from church names. For that reason, in 1921 the German Congregational Church in Berthoud became the First Congregational Church.

The church continued to function in Berthoud under various names until 1962 when the building was sold for use as the Church of Christ. At the present time the building is no longer used as a church.