Growing sugar beets in Northern Colorado will always be inextricably linked to the Germans from Russia. In the early 1900s the children of Germans from Russia, in particular, played key roles in harvesting sugar beets even though the country schools they attended were already in session. Harvesting sugar beets required large crews of workers, so children were enlisted to perform tasks such as “topping” beets (hacking the leafy greens from the tops of the beets) in order to get the crop out of the field before the fall’s rain and snow brought the harvest to a halt. 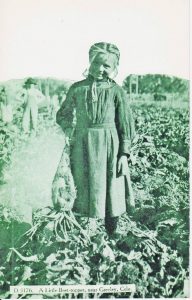 The photograph that accompanies this article, an image from a photo postcard published by the Greeley Tribune newspaper, shows a “Little Beet-topper” at work in a sugar-beet field near Greeley around 1910. The young girl, presumably a member of a German from Russia family, is holding a sugar beet that had not been topped.

The “Germans from Russia” were ethnic Germans that Empress Catherine the Great recruited to the Volga region of Russia beginning in the 1760s. These people were allowed to maintain their German language and culture while thriving in Russia for several generations. When the Russian government reneged on Catherine’s promises at the turn of the 20th century, large numbers of them came to America.

Many of the German from Russia families that landed in the Berthoud area were from the Beideck, Norka, Frank, Huck, Kutter, Kautz and Kolb “colonies” in the Volga region.

Miss Ivy Stockwell, the namesake of Berthoud’s Ivy Stockwell elementary school, taught at the Whipple country school during the 1912-13 and 1913-14 school years. In later years Stockwell was employed to teach special mid-summer sessions for Whipple students who had missed classes during the sugar-beet harvest. Some of these students, including those from the Peter and Katherine Sterkel family, were children from the German from Russia families that raised sugar beets in that rural district east of Berthoud.

It was not uncommon for country schools in Berthoud’s rural districts to close down to accommodate the sugar-beet harvest. Throughout the 1920s, for instance, the school board presiding over the Old Berthoud country school that was located one mile south of Berthoud, declared a “three-week beet harvest vacation” in early October.

The break from school hardly qualified as a “vacation.” As early as 1916 the National Child Labor Committee determined children from the ages of 8 to 12 years routinely worked up to 12 hours per day during the sugar-beet harvest.

During that decade the German from Russia children who participated in the Old Berthoud beet harvest vacation were members of the Aschenbrenner, Borback, Gettman, Hohnstein, Kaiser, Krieger, Sechler, Strasheim, Weitzel and Yeager families.

Eventually the advent of tractors and mechanical farm implements lessened the need for hand labor, particularly from children. It would not be until the 1940s when there was a labor shortage due to World War II that more “beet vacations” would be declared by Berthoud’s school district. But then it would be high school students, not 8 to 12-years-olds, helping to bring in the beets.