Massachusetts Avenue building is among the town’s oldest

In a series of local history articles that appeared in the Berthoud newspaper in 1952, local historian S.E. Newell wrote,” the building where the fire trucks are housed in an old building. It was occupied as a grocery store by Mr. Van Deludia.” In a subsequent column, Newell corrected his claim by announcing, “In last week’s article the man who conducted a store where the fire trucks are stored was Van Delinder.” The man’s surname was actually “Vandelinder” and the address of the “old building” has been both 330 and 332 Massachusetts Avenue. 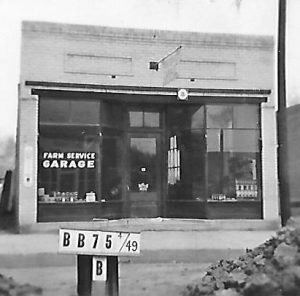 Photo courtesy of Berthoud Historical Society – In 1949 the Larimer County Assessor photographed the building at 332 Massachusetts Avenue. When the local fire department obtained the building for storage of their fire trucks one year later, the building’s large plate glass windows were removed and two garage doors were installed in their place.

The old building was one of the first commercial buildings to be built in the fledgling burg of Berthoud. Erected prior to 1890, the brick structure is located on the west flank of the alley on the north side of the 300 block of Massachusetts Avenue. Its modern moss rock façade disguises the antiquity of the brick structure that has had many occupants over its century-plus life span. When Newell penned his articles in 1952, the building had recently been purchased by the Town of Berthoud for storing the fire department’s two fire trucks.

In the early 1890s the building at 330 Massachusetts Avenue housed a “cash store” managed by a gentleman identified as “L. VanDerlinder.” Cash stores, generally unsuccessful ventures in agricultural communities such as Berthoud, only accepted cash and did not extend credit to customers. Local farmers depended on merchants to carry them on credit so the man nicknamed “Cashstore” VanDerlinder was off to another venture in 1895. Before departing town he also served as a Berthoud town trustee and the police judge or magistrate.

When the school in the town of Berthoud became overcrowded in 1894, the local school board rented the building and made it into a schoolroom for first, second and third graders. One of the students later recalled, “Miss Susie Turner was the teacher. The playground equipment consisted of old binders and mowing machines back of the school building owned by the Davis-Hartford Mercantile Company.” (A “binder” was a horse-drawn farm implement that bundled grain or corn into shocks.)

Students eventually returned to a new school building that had been constructed at the center of present-day Fickel Park. The building was then rented by carpenter John Lutener who used it as his shop. During Lutener’s tenure in the building, he painted wagons for his brother Sam (a blacksmith who built wagons), constructed a house for Andy Berglin at 806 Fifth Street, and made carpentry repairs to the Old Berthoud and Lakeview country schools.

In 1902 Lutener was displaced by R.C. Hardesty, editor and publisher of the Berthoud Bulletin newspaper. Hardesty purchased the building and printed the local tabloid at that location until February 1912. The building was then leased to Miss M.B. Pearce of Denver who used it as her millinery shop.

By June 1913 Miss Pearce had closed her shop and G.G. Osborne was renting the building for use as a pool and billiard hall. Osborne was gone by November 1914 when Mr. and Mrs. Wiswall of Longmont leased the building for “Wiswall’s Picture House” or photography studio. An auxiliary firm known as Roberts & Wiswall also sold a line of lady’s spring and summer dresses and suits from the building.

When Garvin moved his store to a new location on Fifth Street (present-day Berthoud Pizza Company building) in 1926, Billy Lynch and William Lyon relocated their harness shop and shoe repair business to the old building. Cobbler Jake Zoller eventually purchased Lyon’s interest in the business and worked there with Lynch for several years. When Lynch retired in 1937 Zoller relocated his business to another shop across town.

The Berthoud telephone directory indicates that the Farm Service Garage was located in the building that had an address of 332 Massachusetts Avenue in 1947.

In 1950 the building secured perhaps its most long-term occupant when the Town of Berthoud purchased the structure. In November 1950 the local newspaper reported, “The Berthoud Fire Protection District has purchased the building at 332 Massachusetts, next to City Hall, now occupied by the Farm Service Garage. The 20×30 ft. building will be remodeled and used for more efficient storage and maintenance of the two fire trucks now owned by the district. The purchase was made from Frank May, Valentine, Nebraska, for $1,750.”

When the local fire department obtained the building two garage doors replaced the large plate glass windows in the front of the building. Before 1950, Berthoud’s fire truck had been stored inside a makeshift garage beside the front entrance to the town hall building at 328 Massachusetts Avenue.

The old building at 332 Massachusetts Avenue continued to house Berthoud’s fire trucks until the Berthoud Fire Protection District facility was constructed on East Mountain Avenue in the early 1970s.

Over the years the building at 332 Massachusetts Avenue has been referred to by many names including the Bransom building, the old Bulletin building, the Fitzwater building, and the G.M. Davis building. One of those building namesakes, Bob Bransom will be the topic of next week’s tale.