School closures during pandemics not new to Berthoud

It remains to be seen how effectively Berthoud schools will be able to function under the veil of the COVID-19 pandemic. This year is not the first time that the educational system has been disrupted in the schools of Berthoud and Little Thompson Valley.

In the community’s early years there were several country school districts in the rural area surrounding Berthoud. In December 1885, less than one year after Berthoud was moved from its original site on the Little Thompson river bottom to its current location, Sunnyside School District No. 36 northeast of Berthoud closed as a result of a diphtheria epidemic. Since the fledgling Berthoud community did not have a newspaper at the time the Fort Collins Courier announced, “The school in the Sunnyside district has been closed on account of the prevalence of diphtheria in that locality. Several deaths among the children have already occurred.” 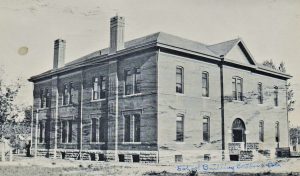 Photo courtesy of the Berthoud Historical Society – During the Spanish Influenza pandemic of 1918-1919 Berthoud students in grades one through twelve attended classes at the Berthoud School (no longer standing) in the center of present-day Fickel Park. The pandemic caused the school to be closed for several months in late 1918.

The Sunnyside District—established in 1880—was governed by a three-person board that hired and fired teachers and had the authority to close school when needed.  The school house (no longer standing) was located at the northwest corner of the present-day intersection of Weld County roads 46 and 7. Diphtheria, a serious infection caused by bacteria, may have spread from child to child through coughing and sneezing.

In 1896 the “Berthoud School” was located on the east side of 6th Street across from present-day Fickel Park. The school house (no longer standing) housed students in grades one through eight. In December of that year the Berthoud correspondent for the Fort Collins Courier reported, “There are three cases of scarlet fever in town, the result of two children going to school when they were just recovering from the fever. Their parents did not know that they had the disease. The schools, especially the primary department, are almost deserted.”

In the 1800s scarlet fever epidemics were not unusual. Scarlet fever is contagious through contact. It was not until the late 1800s that diphtheria and scarlet fever were recognized as separate diseases. Whooping cough was another prominent disease of the time.

A lengthy closure of the school in the town of Berthoud occurred in the winter of 1918-1919 during the Spanish Influenza pandemic. The school opened as usual on September 3, 1918, but closed little more than a month later on October 9, 1918. The plan was for classes to resume on November 25, 1918, but a new wave of infectious cases caused schools to remain closed for the remainder of 1918. Only after an affirmative vote of parents did classes resume on January 15, 1919.

A few days later on January 17, 1919, the Berthoud Bulletin reported, “Schools of Berthoud re-opened Wednesday, January 15, with about 60 per cent of the usual attendance. It is expected that this will be considerably increased next Monday.

“To guard against influenza the school board is causing all children whose parents give consent to be inoculated against the disease. The pupil may choose his physician and receive the treatment free of charge to himself.

“In order that the year’s work may be completed and the pupils receive their promotion, the school day has been lengthened by one hour in the high school and upper grades, and one-half hour in the third and fourth grades. The school day will be the same for first and second grades. The school board has also decided to extend the school term by one month, thus closing the session on June 6th. So there are yet five months of school, and the first semester closes in two months, leaving three months for the second semester’s work.

“The days will be filled with work, to be sure, but it is the intention of the teachers to encourage the pupils to their best efforts, to omit the less important topics, and make it possible for them to gain their promotion. However, those desiring to do this, should enter at once, be regular in attendance to the close of the term and apply themselves while here. This is a time when cooperation of parents, pupils, and teachers is necessary to make the year’s work even fairly successful.”

Many vaccines were developed and used during the 1918-1919 influenza pandemic. It is not known which vaccine was administered to Berthoud students but it is certain that there were numerous contradictory claims about any vaccine’s success. In truth an effective influenza vaccine was not developed until the 1940s.

On June 6, 1919, Berthoud’s 1918-19 schoolyear came to an end as scheduled. There were additional deaths in the community from the influenza in 1920 but school remained in session.