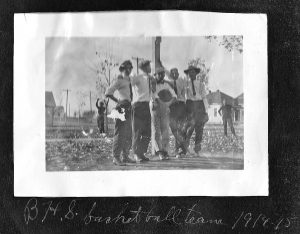 Photo courtesy of the Turner Collection Berthoud Historic Society – This snapshot from Gerald Turner’s photo album is captioned “basketball team 1914-15.” It is thought that Turner is the young man holding the basketball.

One of the most pressing needs of the Berthoud community during its early years was a large hall that could serve as a meeting place. That need was filled in the summer of 1890 when Fairbairn & Company constructed a new lumberyard building at the present-day address of 275 Mountain Avenue. The two-story frame structure was razed several decades ago to make way for the Berthoud Fire Protection District building and community center.

When the lumberyard building was completed the Loveland Reporter newspaper noted, “The upper floor is the opera house. This room, 10’ x 34’, is reached by a convenient stairway. This is furnished with a stage having curtains, side entrances, two empty crockery hogsheads for dressing rooms and a nail keg of sawdust for a spittoon. The hall is seated with 300 chairs and lighted with three chandeliers. Although not as large as the ‘Tabor’ of Denver, it makes a comfortable hall, with sufficient room to meet the long-felt want of our thriving town. Fairbairn & Co. merit the thanks of our community in preparing it comfortable for public use.”

In addition to being used for large meetings and traveling minstrel shows the hall or “opera house” also served as the local basketball court. In November 1905, for instance, the Berthoud newspaper identified the hall as an “opera house” when it announced, “A basketball team is being organized by the young men. They have secured the opera house for practice, and expect to be in working order in a few weeks.”

While Berthoud’s newspaper routinely reported the results of local baseball games, the sports of school students were seldom covered.  For that reason the diary of Berthoud High School student Gerald Turner is the sole source of information for basketball in Berthoud during the early 1910s.

On Thursday, September 18, 1913, Turner, a high school junior, noted, “The Prof. is coaching the boys for a basketball team now he seems to know about all there is to know about it,”

In 1913 the Berthoud School (no longer standing) was located at the center of present-day Fickel Park. That year W.G. Stoddard, the man Turner identified as the “professor,” acted as principal of grades one through 12. Stoddard not only carried out the duties of school principal but also taught high school classes along with Miss Iva Spaulding and Miss Madge Martin. The Berthoud School was not equipped with a gymnasium so the boys’ basketball team practiced intermittently in the opera house above the lumberyard.

On Friday, October 31, 1913, Berthoud’s high school basketball team traveled to Johnstown for a game. Turner noted that they were defeated by a score of 12 to 11. The following Tuesday he added, “Basket-ball practice is on again to-day. They play Johnstown again Sat. night in the hall.”

Berthoud would not get around to playing Johnstown again until November 15, 1913. In his diary Turner reflected, “As usual BHS lost 16 to 15. A Johnstown man refereed and the Prof. claims the boys were beaten out of 3 points. But that didn’t give them the game.”

Turner eventually put down his diary before returning to it on Monday, December 21, 1914. On that date he wrote, “Back again! It has been almost of year since I have found consolation in this old diary. I am a senior…We played basketball last Friday night with LaPorte H.S. and beat them 21-20. That makes three games won and one lost. We beat Johnstown H.S. (an old enemy) 64-12 and Longmont H.S. 2nd team 12-6. They beat us 34-20 on our own floor….”

It would not be until May 1921 that the Colorado High School Activities Association (CHSAA) would be founded, giving interscholastic sports—including basketball in Berthoud—a governing body that set rules and regulations.

A new school building that housed the community’s junior and senior high school students was opened at the northwest corner of 9th Street and Turner Avenue for the 1921-22 schoolyear. The Berthoud Bulletin reported that the facility was equipped with a “gymnasium in basement, 50 x 65 feet with 17 foot ceiling.”

That winter playing basketball became a popular winter pastime—for both boys and girls—but that’s a tale for another time.