In 1940 Berthoud community cooled off in Vernavy Pool 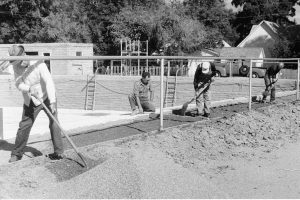 In 1940 local volunteers graded the perimeter of Vernavy Pool in preparation for the installation of concrete sidewalks. The pool measured 100 feet in width and 144 feet in length and was built by community volunteers.
Photo courtesy of Berthoud Bulletin Collection/ Berthoud Historical Society

Berthoud’s first swimming pool was built in Town Park in 1940. Prior to that time the community’s water lovers swam in irrigation lakes and ditches and, in some cases, a concrete water basin at the Berthoud waterworks. In 1938 that infraction carried a hefty $25 fine and the unbridled scorn of town residents. Taking a dip in the town’s water supply was considered so heinous that a $5 reward was offered to anyone who gave information leading to the conviction of such an offense.

In 1939 the Berthoud Junior Chamber of Commerce took the lead in securing a place to swim in Berthoud. Volunteers from the organization built dikes and installed gravel in the bottom of a dry pond north of Berthoud High School and filled it with irrigation water from the Big Thompson River. The “pool” ranged in depth from two to seven feet and featured a diving board and drain pipes. The temporary arrangement was so successful that the following year the junior chamber set about purchasing a 13-acre tract of land at the southwestern edge of Berthoud where a modern swimming pool could be constructed. Today known as Town Park, the site was to be landscaped and equipped with a swimming pool, skating rink and ball park. The Town of Berthoud paid a small fraction of the cost.

Beginning in the spring of 1940, the pool was built with volunteer labor. Vern Johnson, the Town of Berthoud’s street commissioner, and Rev. A.V. Howland, pastor of the United Brethren church, played key roles in the project. The pool was named Vernavy Pool to honor their efforts. (The name Vernavy was a combination of the men’s first names: “Vern” and “A.V.”) The pool was opened on July 20, 1940, and was paid for with funds secured from financial “subscriptions” given by community individuals, organizations and businesses.

Street Commissioner Johnson worked tirelessly on the project. He secured Larimer County’s power shovel to excavate the hole for the pool and lent his hand to every phase of construction, from grading to masonry work. Rev. Howland mobilized his church’s youth organization and the community’s young people to help raise funds for the project.

Vernavy Pool was located at the west end of the park and in the general vicinity of a tennis court that presently occupies that area west of Seventh Street. The pool, which had a concrete bottom and sandstone block walls furnished by the Benson Quarry, measured 100 feet in width and 144 feet in length. The facility included shower and toilet rooms and a diving tower, and was enclosed by a tall wire security fence. A “water carnival” that was well attended by the community was held to open the pool in July 1940.

People still remain in Berthoud who remember Vernavy Pool and the hordes of local children who congregated there to attend swimming classes and cool off on hot summer afternoons. Memories of the rough pool bottom, cold water, and foreboding shower and toilet rooms seldom escape their mention. In 1940, however, Vernavy Pool represented the community’s aspiration to provide its youth with a park and modern swimming pool that was considered decades overdue.