There is a good chance that your new neighbor is a rocket scientist. Literally.

Ursa Major Technologies, located on the eastern edge of Berthoud near I-25 and adjacent to the Serenity Ridge Development, engineers, assembles, tests and delivers rocket engines for a wide range of use in various applications.

“We are leading the charge in a new space race by developing the highest performing, lowest cost and most reliable engines for launch and hypersonic applications. Our enabling technologies are shortening launch timelines and increasing propulsion capabilities,” Ursa states on its company website. “Pushing technology to the edge of possibility, our advanced manufacturing optimizes unique part creation. These engines are greater than 80% additively manufactured by mass using cutting-edge, internally developed materials and processes.” 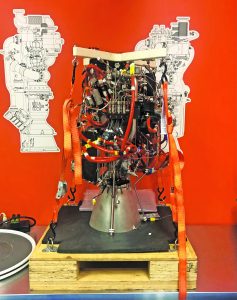 Ursa’s primary customers are in the field of hypersonic testing; testing how vehicles behave when they travel at speeds six to seven times the speed of sound, or 4,604 to 5,371 miles per hour. Companies such as Stratolaunch, Generation Orbit and C6 Launch, among others, are some of Ursa’s customers. While the Hadley and Ripley models are the starting point, customers often need minor tweaks or changes unique to their application and Ursa delivers to spec.

Ursa designs and builds everything from the ground up using cutting-edge technology. A great many of the components used in the engines are created using state-of-the-art 3-D printers, each printer costing over $1.5 million. When producing an engine component, the 3-D printers will run round the clock, constructing the component 0.040 millimeters at a time. Depending upon the size and complexity of the component, production can last anywhere from several hours to more than two weeks. After the 3-D printers have produced the components, they are then precision machined to extreme specifications before assembly of each engine begins.

After an engine has been fully assembled, it is subject to two trial runs in Ursa’s test bunker. The first test, an activation test which lasts no more than 15 seconds, provides data feedback to Ursa’s control center regarding the activation of function of valves which provide the engine’s fuel mixture. Changes to the engine can then be made if necessary, before the second test, which lasts two to three minutes and tests the full functionality of the engine.

Ursa quotes customers at six- to nine-month delivery windows from order placement to shipping the engines out the door. Doucette explained the company is growing at a rapid pace and just recently received an order for 16 Hadley engines. As the company’s product lines continue to grow, so will their workforce. Currently Ursa has 82 employees but that number will grow to over 100 by year’s end and, over the next two to three years, expand to have up to 250 employees, all of whom are extensively educated in engineering, physics, metallurgy and similar, highly-specialized disciplines.

Ursa has developed and employed a new business model, one of specialization in the field of rocket engine design and manufacturing. As Doucette, who has a background in both aerospace engineering business operations, explained, “If Ursa works out, we are the first company to take this vertically integrated model where everybody builds everything, that’s what everyone is trying to do now, and we’re tipping on its side and saying we can specialize in engines and be really good at it. It’s not any different that what GE did with Boeing, it’s not any different than what Rolls Royce did with Airbus.”

And the industry has taken notice. “In the past, shipped three to six engines per year, now we’re taking the next step, going to 10 to 20 and as we continue to build out these product lines, we’ll need the headcount to support it.” Doucette explained.

Safety protocols and sound mitigation techniques are at the forefront of Ursa’s operations. Doucette explained that twice per month the entire team participate in what are akin to fire drills so, in the case of a catastrophic failure during an engine test, everyone remains calm and composed in such a situation. The engine test bunker and equipped with a high-end fire suppression system that, in the case of a failure, can flood the test bunker with liquid nitrogen to remove every drop of oxygen in less than 20 seconds. Twice annually, the Berthoud Fire Department visits Ursa’s facility as well, going over an extensive checklist in the event of an emergency.

Doucette called the nearby Serenity Ridge development “great neighbors” and stated Ursa provides residents, as well as the nearby BioChar facility, with text message alerts 15-minutes prior to conducting an engine test. “We just want everyone to be aware of what we do we’re do, it’s a little odd, it can be a little noisy,” Doucette said.

Ursa Major’s leadership is very bullish on their prospects for growth and grateful to be a part of the Berthoud community. As Doucette explained, “If we can do this, and we can grow to two, three, four hundred people, then Berthoud will essentially become the next cradle for aerospace innovation; we’re changing the way rocket engines are made and we’re doing it here, in a small town that has been super supportive of us.”