Things may not always work out the way you planned, but they can sure work out for the best anyway.

Jim Rowan and his wife Tammy, owners and operators of Berthoud-based White Paper BBQ, came across their new venture almost by happenstance. Rowan, a long-time chef, would bar-b-que, grill and smoke meats and sides as a hobby, at times traveling out of state to compete in various competitions, some of which included charity events.

When some friends had a ready-to-go barbecue trailer complete with a smoker pit that they discovered they could not store or haul, Rowan and his family decided, “If we’re going to store it, we’re going to put it to work.” And thus, a made-from-scratch business was born. 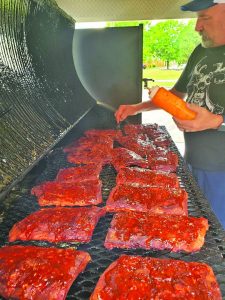 As Rowan explained, “It really started very much on the whim, we started the process and made sure we got it legal, we did all the things and put it together, so we did and we finally were able to open on Labor Day of 2019.”

Upon securing the trailer, Rowan and friends began discussing what they could do. Using literally charcoal and white paper, the group began writing down ideas. The name was born. Now, nearly two years after beginning operations, Rowan keeps black crayons and white paper for children to draw on and then displays their renderings.

“White Paper BBQ was born out of the ideas of history is meant to be changed. We use the traditions and respect them but have changed the way we do it (to a point). Excellence in our food is all we strive for each and every day. Using reverse flow pits, only oak firewood and time bathed in smoke is our method and process. Meat is king, sides are important and sauce is necessary (only because society has deemed it so),” reads White Paper BBQ’s website. “Our success is based on the smile our customers face not with trophies on the shelf.”

Working primarily at locations around Berthoud and in Estes Park, White Paper BBQ slowly but steadily gained traction. “We took a swing at it, we had an interesting few months,” Rowan explained, adding that they would work a few days on the weekends and, though the final four months of 2019 were selling their smoked meats and sides – a Tex-a-Rado style of BBQ which White Paper describes as “Texas-style dry rub based barbecue, no sugar in a pork rub, then add the elevations of Colorado” – at 20 events in the region.

When the pandemic hit in force in early 2020, it threw a wrench into the gears of the operation but Rowan kept moving forward. Word-of-mouth advertising and marketing helped White Paper continue to grow and Rowan was inundated with requests to cater everything from weddings to graduations.

White Paper began working at “pop-up” events – basically presale, drive-thru and pickup affairs to adhere to distancing stipulations – and, even though the leanest times of the shutdowns, White Paper continued to gain a following.

“We could see it was catching on and that it was gaining traction,” Rowan said. Having established a foothold in Berthoud, Rowan developed a relationship with Mark and Jesse Sommers, owners of Berthoud Brewing Company. Initial conversations between Rowan and Sommers focused on Rowan parking and removing the wheels, of the barbecue trailer at the brewery. Yet Rowan wanted to keep his operations mobile, serving the region at various events.

When Berthoud Brewing transferred their production operations to their Loveland location and had available space, an idea was born. Rowan would keep his mobile barbecue trailer while simultaneously working to open a fixed location in the former brewhouse at Berthoud Brewing.

Progress on completing the storefront operation next to Berthoud Brewing has hit some obstacles and run into a few small snags, but Rowan foresees opening in the near future. The storefront will have more expanded offerings than the truck and trailer, Rowan explained. In addition to the very popular pulled pork, brisket, smoked turkey and custom sausages, the storefront will offer rotating offerings including prime rib, smoked burgers, local pork belly, beef ribs and double-cut pork chops, among others. Initial plans call for the storefront to be open Wednesdays through Sundays beginning around 11:30 a.m.

Rowan was highly complimentary of the support he has received from the community and made special mention of the Berthoud Area Chamber of Commerce. “I want to start by thanking (Berthoud Chamber Executive Director) Melissa (Feldbush) and all the people in the (Berthoud) chamber for all their support and backing,” Rowan said. “They have been absolutely amazing, they have helped us out, given us the chance and the voice and they have been phenomenal.”

White Paper BBQ has active Facebook and Instagram pages – both found by searching for White Paper BBQ – as well as a website, www.whitepaperbbq.com, which details their available menus, locations and hours of operation.