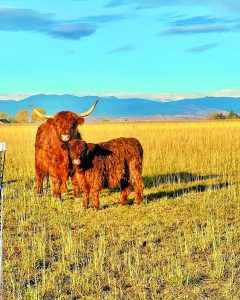 Just east of downtown Berthoud, Jenna and Ryan Schaefer have invested in their future by rooting themselves in the past. Their Mountain View Farmstead harkens back to a simpler time, when rural families relied on themselves and their neighbors to live comfortably off the land. They specialize in raising “heritage” breeds of Scottish Highland cattle, Hungarian Mangalista pigs and Bresse or Red Ranger chickens. Some of these breeds originated centuries ago.

The Schaefer’s story started more recently, when the high school sweethearts married in Loveland and began a family. They dreamed of buying enough property to start a farm and raise their children. They spent years driving the area’s rural roads, looking for the right place. One day, driving near Berthoud on a road they’d traveled many times, they noticed a sign advertising acreage for sale. It was an ideal location. After talking with the owner they were stunned to find out that the sign had actually be there for 8 years, they’d just never seen it. They believed it was a sign from God that they were meant to be there, so they sold their home in Loveland and bought the land. They moved their three children into a camper on the property while they built a home and began to shape their dream.

Today, the Shaefer family is still moving that dream forward. Mountain View Farmstead’s business is growing by providing local clients with eggs and meat products not commonly found in northern Colorado. Their choice to raise heritage breeds is part of their commitment to getting back to basics. Jenna Schaefer describes their beef, pork and chicken as “slower growing, which means they aren’t forced to grow faster than they’re genetically programmed to grow.” She describes their Mangalista pork as “completely different than anything you’ll find in stores. It’s a red meat and looks more like a ribeye steak than the white or gray pork you usually see.” Originating in Hungary, the Mangalista breed dates back to about 1830 and is known for its curly hair and rich flavor.

The Schaefers also raise Scottish Highland cattle, a breed which Jenna describes as “cute.” Their shaggy coats make them appear more like rag mops than cows, although the long horns on both males and females make them unmistakably cattle.   “They have docile personalities and they love people. They’re very easy to work with.” said Jenna.

The American Highland Cattle Association says, “archaeological evidence of the Highland breed goes back to the sixth century [in Scotland]. The first recorded importation into the United States occurred in the late 1890’s.” The Association goes on to say, “a study by the Scottish Agricultural College determined that Highland beef is lower in fat and cholesterol and higher in protein and iron than other beef breeds.” Centuries of genetic hardiness makes Highlands ideal for enduring cold winters in Colorado. 15-year-old daughter, Ellie Schaefer, placed third in showmanship with one of the family’s Highland’s at the Larimer County Fair this year.

All three of the Schaefer children are very involved in working the family farmstead. ten-year-old third grader Emery is the youngest, Ellie is in tenth grade, and Aiden, 19, graduated from high school last May. 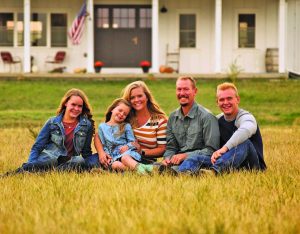 Home schooling is another way the family has found to stay closer to the land. “So much is learned outside of the four walls of school,” said Jenna, who is passionate about teaching her children how to live sustainably, “we learn whether we’re inside with books or working with the animals, we’re constantly incorporating math and science. The opportunities for learning are everywhere.”

All three kids have been very involved in 4-H, which has become a source of community for the entire family. Ryan Schaefer appreciates the camaraderie of 4-H families. “We get to be in community with each other and each other’s kids,” says Ryan, “Everyone circles together to help each other out.” Close community is what they love about Berthoud too.

Next year the Schaefers plan to double the number of chickens they raise, and will likely raise more Highland cattle and Mangalista pigs too, because they already have a waitlist for next year. They also have plans to add a dairy cow. Meanwhile, Jenna also has a robust portrait photography business called Farmhouse Photography and Ryan runs Trimrite Woodworks as an interior trim finisher. As if that’s not enough, they recently converted a 1970’s horse trailer into a mobile bar called The Thirsty Mule, which they use to hire themselves out as bartenders for parties and events.

“Ryan and I have always felt we were born in the wrong era,” admitted Jenna, “We have so much respect for the generations that came before us and how they took care of their animals and their families. We want to keep those values alive for future generations. We want to be good stewards of what God has given us.”

You can find more information about Mountain View Farmstead at their website: mountainviewfarmstead.com.