Spreading the art of tattoo

Berthoud’s J.D. Markwardt does what he loves and loves what he does 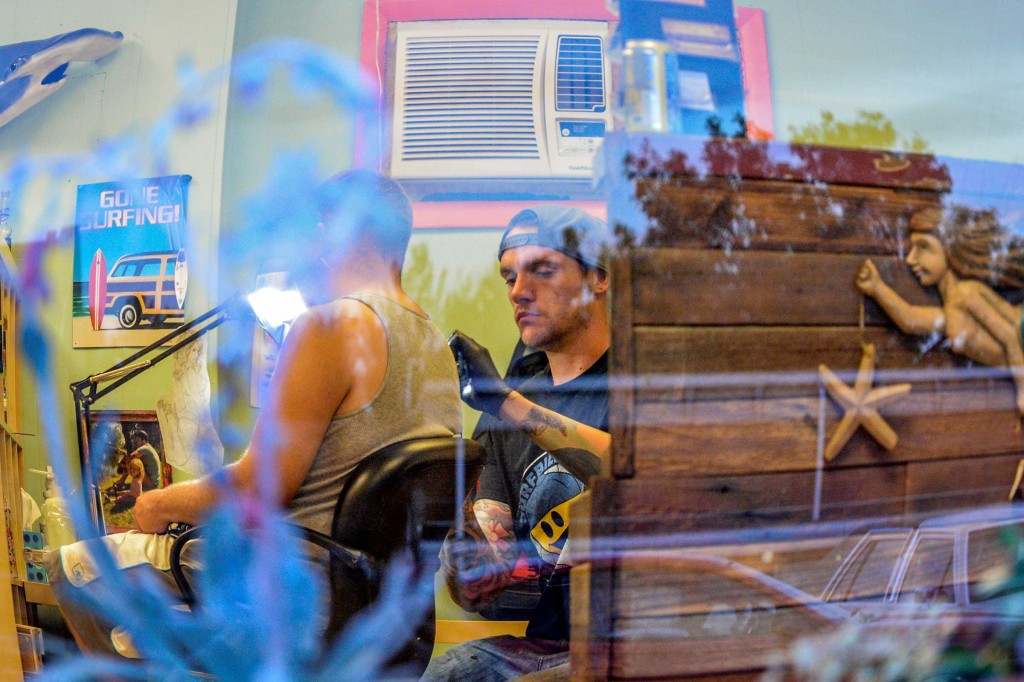 It can be heard faintly from the street approaching the open door to Surfbilly Tattoo; the buzzing of the tattoo machine telling a story in a sort of modern day Morse code.

And it does–in a way–tell a story; the journey of tattoo artist and entrepreneur J.D. Markwardt and his travels that eventually led to him opening Berthoud’s lone tattoo shop.

Inside, Jeff Wicks sits in the black leather chair, similar to the one found in a hair salon. It’s 5 p.m. on a Thursday and Wicks gets some ink done.

Markwardt sits beside Wicks, tattoo machine in hand, creating a piece of art on Wick’s right arm: a pinup girl.

Markwardt pauses several times and looks at a drawing of the tattoo, taped and hanging from the lamp beside him, for reference. “Keep it hid” by the Black Keys’ Dan Auerback fills the room during breaks in conversation.

He’s happy about having a tattoo shop in Berthoud. 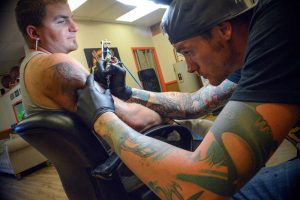 Berthoud’s image reflects a rural lifestyle and agricultural heritage that is present everywhere; it’s an image opposite the rock-n-roll artistry one often thinks of the tattoo culture. But the town’s noticeable support of art is present, too. Just outside Surfbilly’s front door, located at 435 Third St., across Mountain Avenue to the north; Berthoud’s agricultural pride is painted 100 feet tall on the wall of an old grain elevator on Massachusetts Avenue, depicting the harvest.

At first glance Markwardt sticks out in rural Berthoud; where cowboy boots, wrangler jeans and button-up shirts are more prevalent apparel. Tattoos cover Markwardt’s forearms and, when he wears shorts, his legs sport ink too.

He doesn’t know how many individual tattoos he has, “the goal is to have just one” he said.

Juxtaposition is a reoccurring theme in his life.

When Markwardt started out, he wasn’t sure about having his own shop, but it became a goal.

“It became apparent pretty quickly that it was something I wanted to do,” he said.

It’s the artist in Markwardt that led to his career. Opening a shop in Berthoud occurred as much out of necessity as it was a perfect fit. He and his wife, Amiee Markwardt, and 4-year-old daughter, Bettie Ann, have lived here for about a year.

J.D. was working at a shop in Broomfield, where he’s worked for the past five years or so. But, it just felt like the right time to go out on his own and make Surfbilly a reality. And now that he’s here, the trip has all been worthwhile.

“It’s been a long haul, mostly filled with good experiences,” he said. “I can’t imagine doing anything else now.”

But J.D.’s decision to be a tattoo artist wasn’t always so easy. He spent years perfecting his craft as an apprentice, sometimes up to 12 hours a day for about 18 months, while working odd jobs on the side just to pay the bills. The apprenticeship is the school of the tattooing trade and he spent months cleaning the shop and making other tattoo artists happy.

“You’re basically a slave; it’s your tuition,” he said.

J.D. never aspired to be a firefighter or anything like that, he said. He knew he liked art and, after working as a pizza delivery driver, and even an electrician for his father for a while, he realized those types of professions weren’t for him.

“I don’t want to do anything else,” he said. “I’ve done a lot of stuff that I knew I didn’t want to do. So, this is it. I put my nose to the ground and grinded through it for a long time.”

But there were times of doubt, too.

“You just have to decide that you’re going to do it,” he said.

After several years of flirting with the idea of being a career tattoo artist, J.D. leapt into his career of choice armed with tattoo guns in each hand. “I said, ‘alright, it’s tattooing or nothing.’”

Tattooing has given J.D. more than just a career and his own business; it’s also provided him a life perspective that he embraces in his business as well. “Surfbilly” is another example of contrast in J.D.’s life; it’s a perspective that combines both the laid-back surfer attitude and the fearless rebellion of the hillbilly culture, according to J.D.

We’ve all got goals; sitting on a beach all day, surfing and staring at waves is J.D.’s. But for now, he’s comfortable at home in his tattoo parlor, tattooing for a living and loving every minute of it. 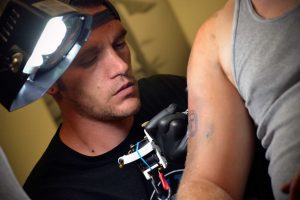 J.D.’s tattoos are all custom images, created by him. Much like his tattoos, his shop is unique because of his flair for the beach-bum lifestyle. Through his construction background, J.D. learned a lot and did the majority of the work in the shop himself. He views the shop as a work of art, too.

“You’re still making something,” he said. Being creative is the key.

He uses the highest-end products, such as top-end inks, high-end needles, and after care products, too.

“I put the extra money into it to ensure you’re getting the highest-end product you can get when you walk out of this shop,” he said.

Each piece is as unique as Surfbilly Tattoo’s custom-made cabinetry.

When it comes to the actual art, in the industry there are a lot of trendy tattoos and if a client requests one, he’ll likely accommodate, but not before at least attempting to convince them to Surfbilly it up a bit.

Surfbilly’s mantra: Own your body. Leave your mark.

It’s similar to the way he lives his life; he’s leaving his mark on people and the community of Berthoud. The faint buzzing of the tattoo machine can be heard on the sidewalk in front of Surfbilly Tattoo as he works.