The history surrounding us

Discovering the history that lives on Berthoud’s back roads

“The people of this part of Colorado know all about Highlandlake, but for others, elsewhere, we shall say that it is in Weld County, about nine miles northeast of Longmont. It was settled in 1871 by L. C. Meade… It takes its name from the beautiful lake within its limits, and is noted for its fine, tall shade trees, fishing, boating and productive soil,” an excerpt from the Longmont Ledger September 1903, titled The Beautiful Highlandlake Country. 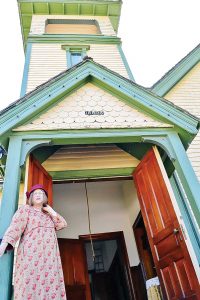 Pauli Driver-Smith, a Highlandlake historian and volunteer for the historic committee, welcomes visitors of the Berthoud Historical Society’s Berthoud Backroads field trip on July 11.
May Soricelli / The Surveyor

Stepping back in time

Highlandlake historian Pauli Driver-Smith threw open the grand double doors leading to the entrance of the Highlandlake Church and welcomed the group to experience the pristinely restored and preserved structure, with dark-green trim, pale-yellow siding, and a steeple reaching toward the sky. Light shone through the rainbow of colors on the towering stained-glass windows and lit up the electricity-less white chapel. Massive wooden beams line the ceiling. Hundred-year-old seats faced the podium, the same podium which preacher Mary Bumstead-Coates had spoken from a hundred years ago. With every detail left just as it had been, it appeared as if the tour group had stepped back in time when they entered and had the opportunity to feel what must have been felt by the congregation of this church back in its prime. The original piano organ, artwork, paint colors, wood-burning stove, and hymnals were all well-preserved pieces within the building. There were even wire racks beneath the seats where gentlemen would have placed their hats.

Driver-Smith told an incredible tale of Bumstead-Coates, a woman whom she called “my inspiration.”

The community of Highlandlake surrounds the body of water of the same name and has many ties to Berthoud due to its proximity. Historically, residents of nearby towns have come to cool off in the hot summer months and engage in many recreational activities upon the lake. An old photograph of local boys fishing in the lake was even found in the Berthoud Historical Society’s archive of photos. The historical Highlandlake church, which looks over the lake, held many of its social events there at the lake as well.

Presently the lake hosts a hamburger stand, a canoe and paddle boat rental facility, and welcomes picnics and fishing.
Berthoud Historical Society’s board president, Mark French, headed up the Historical Society’s first field trip: Berthoud Backroads. This brought together a dozen individuals who were eager to go on an historical excursion down Berthoud’s back roads and discover the history which lies at Highlandlake, on July 11.

The adventure for the participants began with background history and details given by French at the Little Thompson Pioneer Museum’s flower-blossom-filled courtyard. French detailed the ties in Berthoud and Highlandlake’s history and how closely connected the communities had once been back when buggies were used to bring Berthoud residents to the Highland Lake. These ties go back to Berthoud’s own entrepreneurs who expanded their businesses to the Highlandlake area once they achieved success in Berthoud.

After receiving background on the Highlandlake area, the Backroads tour group traveled down the dirt roads southeast of Berthoud to the Highlandlake Pioneer Cemetery. After taking in the history-rich graveyard, the journey proceeded to travel around the north side of Highlandlake, a small lake surrounded by lush trees and a shady beach area. The group then came to the monument of the town: the Highlandlake church, where a story unfolded of one particular woman who was remarkably responsible for building the faith, memories and structures that shaped the area. That woman was Mary Bumstead-Coates.

Bumstead-Coates began her life in Boston, until her early 20s when she left America to become a missionary in Africa. Upon returning home she became ill and traveled to Colorado to seek relief. When attending the Congregational Church that had been meeting at the schoolhouse in Highlandlake she was asked to share her stories of Africa. She immediately won favor with the people of the church and was asked to preach regularly. Once she became more established as their preacher she saw a great need for a church building for the congregation to worship in. She traveled home to Boston where she raised money to bring back in order to have a church building constructed for the congregation. They successfully laid the cornerstone in 1896 but, due to her no-debt philosophy, they did not fully furnish and use the building until 1897. In 1898 suspicion and tragedy came upon Bumstead-Coates when she “ran off” with the church’s secretary and secretly got married in Boulder. She only lived 10 days following the wedding, after contracting pneumonia.

Driver-Smith said the shock of her death brought many to grieve over her casket as it stood in her church. People threw themselves on her casket in tears and even men fainted and cried at the loss. Her loyal congregation lovingly covered her in her favorite flower, roses, and vowed to give her a beautiful burial and grave marker in the Highlandlake cemetery.

In recent years the historical society received thousands of dollars in grant money to restore “Mary’s” church that had become a nearly destroyed remnant which Driver-Smith called a “house of cards.” Now the building is known to be one of the most well-preserved Victorian, turn-of-the-century churches in Colorado; mainly due to the fact it was never modernized and ceased to be used in the 1920s. Its charm was so appealing even Hollywood took notice of it and chose it as one of the locations for filming of the second “Die Hard” movie. The building has caught the eye of many people and is now used for weddings, tours and community events.

The Backroad’s church tour concluded with the church bell ringing out beautifully across the lake as guests of the tour had an opportunity to pull on the bell cord themselves. 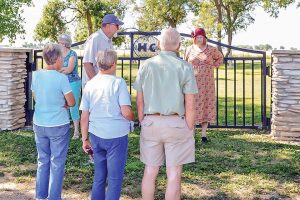 Pauli Driver-Smith tells Backroads travelers about the Highlandlake Cemetery gate at the Highland Cemetery on July 11. The gate was a relatively recent addition to the historical landmark.
May Soricelli / The Surveyor

Tucked amidst the vast agricultural fields, the Backroads tour stopped at the stately iron gates, stone walls, and large shade trees of the Highlandlake Pioneer Cemetery. The well-preserved grave markers, some very large and decorated and some much more modest and small, protruded from the grounds. One particular grave marker of interest stood out in the cemetery, the one where Bumstead-Coates rests.

Driver-Smith eloquently detailed how the cemetery came to be in 1878 when the first burial took place. It later became a cemetery association where others began using the grounds to bury loved ones. The lots were sold for $10 and, though people were using the lots for burials, they failed to pay the landowner which led to a disbandment of the association in 1906.

In 1905 the Highlandlake area began to dry up as residents moved to the up-and-coming nearby town of Mead. Adjacent landowners maintained the grounds until the 1960s, but when they no longer took care of the cemetery it became overgrown and neglected to the point it was no longer recognizable.

“So it kind of fell into disarray,” said Driver-Smith.

Driver-Smith told how one morning, back in 1987, as she was taking her usual walk, she noticed a stone on the ground peeking out of a thick overgrowth of thistles.

“Come spring I began getting neighbors together and started clearing the weeds out. Some of them were taller than me,” she said.

After years of clearing the thick overgrowth, local historical society members began to try and identify the number of graves, the ages of the graves, and the stories behind those who laid there.

In 2010 a professor of Denver University and his students volunteered their time in order to survey the cemetery by use of ground-penetrating radar. The surprising results laid out a grid of many more graves than anticipated. Approximately 45 individual graves exist, while around 125 buried individuals were discovered in the potter’s field, all of this on a one-and-a-quarter acre plot of land.

“It didn’t matter who you were; if you needed a grave you were welcome here. It didn’t matter where you were from, the color of your skin, or your religious affiliation. This was unique, because other nearby towns were particular about who they would allow,” said Driver-Smith.

The survey equipment also identified the remains of one horse that must have had some importance as it had once been encircled with stones. A cadaver dog named Porter “volunteered” his time by helping identify exact locations of those buried. It was observed that he became particularly attached to the grave of one young boy. He would always return to the spot any time he had a break and just lay there. It became evident to observers of the graves that many children were buried there. According to death certificates available, many of them suffered from illness or injury that went without treatment or due to malnutrition in the late depression era.

A Backroads participant asked Driver-Smith if anyone can presently be buried in the cemetery.

“Only those who meet very strict criteria,” Driver-Smith said. “They have to live within 10 miles for at least 20 years’ time, or have a relative that they can prove was buried here.”

“Families continue to show up who have relatives buried in the cemetery and help identify them.” These graves are marked with posts, and the graves receive a headstone once the person is identified.

Driver-Smith said when they began clearing the weeds there was one area, around a wooden cross, that had no thistles and had appeared to have been maintained, while the rest of the cemetery had been neglected. The grave belonged to a migrant worker named Torres. Twice a year – every year – a member of the Torres family has visited the grave, taking care of it. The task now lies with his great-grandson. This grave has the one remaining wooden cross in the potter’s field of the cemetery, while the others that had once existed have now all been destroyed due to nearby burning by local farmers. 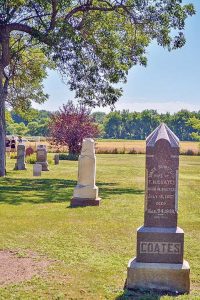 The grave marker where Mary Bumstead-Coates rests.
May Soricelli / The Surveyor

The Berthoud and Highlandlake Historical Societies work together to preserve the past and the people who were a part of it.

“That was the point of the Backroads idea, to show people what is right here in this area that very few even know about,” said French. “It’s surprising how much history is there.”

In the early 2000s an ornate iron gate was constructed by the prisoners at the penitentiary in Cañon City and was purchased for the small sum of $200. Later a stone wall was created to frame the exquisite gate at the cemetery.

One prominent and sunny gravestone of red marble immortalizes the life of Bumstead-Coates. Her story may have ended when she was only 33, but her life left an everlasting impression on the community of Highlandlake; a fingerprint which is still visible today.