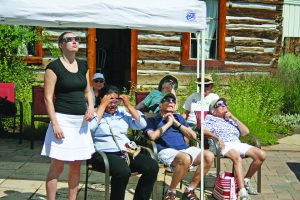 The solar eclipse viewing event the Berthoud Historical Society held at the Little Thompson Valley Pioneer Museum on Aug. 21, 2017, was not the first such event to be held in Berthoud. The first “eclipse party” took place at John Bunyan’s backyard observatory at 601 Eighth St. on the evening of July 15, 1935. Following the celestial celebration the Berthoud Bulletin reported, “John Bunyan had a number of guests at his observatory for several phases of eclipse. The night was ideal for observation.”

Mention of Bunyan’s astronomical observations was made in the local newspaper with great frequency in the 1930s and 1940s. The Denver Post also got into the act in May 1935 when it featured photographs of Bunyan’s observatory and the astronomer with one of his telescopes. The photographs’ caption read: “Money isn’t everything to John Bunyan of Berthoud, Colorado, even though he is a banker. He’s a banker by day, an astronomer by night. Study of the heavenly bodies held such a fascination for Bunyan that he built at the rear of his home an astronomical observatory which is probably the most completely equipped of its size in the United States. When he wishes to make observations, sections of the roof over the main room is rolled to one side on a track, as shown here, and the telescope is raised. Below Bunyan is showed at his 10-inch Cassegrainian telescope.”

In July 1935 Bunyan wrote an article for the Berthoud Bulletin that provided readers of the newspaper with details about an upcoming lunar eclipse. Bunyan wrote, “There will be a total eclipse of the moon the evening of July 15, which will almost be central and the period of totality will be an hour and forty minutes.

“The points where the earth’s orbit and the moon’s orbit intersect are called the moon’s nodes and this time the moon is very close to one of its nodes when it is full. As a result the moon will pass very nearly through the center of the earth’s shadow and inasmuch as the moon moves in its orbit about one moon breadth per hour it will be wholly in the shadow for about an hour and forty minutes. Even when totally eclipsed, the moon can be seen as a dull copper colored object due to the sun’s rays being bent or refracted by passing through the earth’s atmosphere.  JOHN BUNYAN.”

Even though Monday’s celestial event was a solar rather than lunar eclipse, the Berthoud Historical Society continued the community’s decades-old “eclipse party” tradition with a three-hour viewing at the Little Thompson Valley Pioneer Museum. BHS Museum director, Karen Lloyd D’Onofrio, estimated 50 people of all ages participated in the event that included the construction of pin-holes cameras (child’s craft activity), eclipse viewing through safety glasses, and opportunities to examine Bunyan’s original Brashear telescope in a replicate of his observatory.

For more information on free stargazing nights at the Bunyan Observatory, call the Little Thompson Valley Pioneer Museum at 970-532-2147.